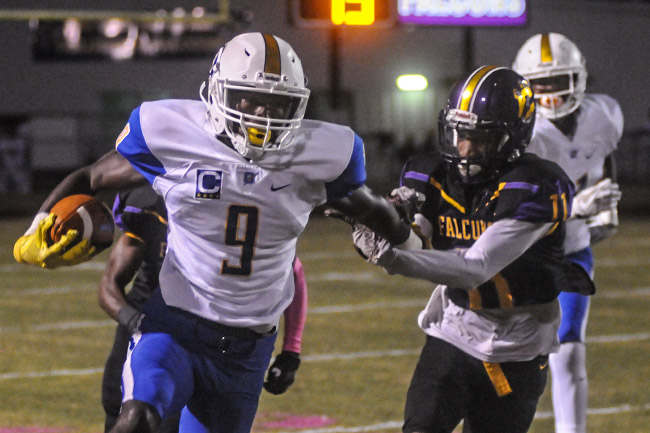 The first early signing period came and went in December with zero Chargers picking a school. On Wednesday — the original National Signing Day — they produced one of their largest signing classes in program history.

Ten Oxford players signed with schools from the Division-I level ranging down to the junior college level. Eight of the 10 are staying in Mississippi while one is playing in Alabama this fall and one will play in West Virginia this fall.

Jaqaun Webb headlines the class, signing with Marshall University and will join the Thunder Herd later this summer. Webb finished his career with 773 yards and eight touchdowns as a Charger. In 2017, his senior season was hindered by a leg injury that kept him out of action for a few games. In the nine games he appeared in, Webb picked up 312 receiving yards and two touchdowns. He had 45 yards in kick returns.

“It’s just home away from home it feels like,” Webb said. “I’ll go through trials and tribulations, but I know I got somebody to embrace me. That whole community will embrace me. … I like the coaching staff. They showed me a bunch of love. I built a great relationship with the receiving coach (Dallas Baker).”

Jamar James will head to Montgomery, Alabama and play for Faulkner University. During his career, James had 152 total tackles, recovered two fumbles and had one interception.

Staying closer to home is standout linebacker Quentin Wilfawn. The reigning EAGLE Player of the Year signed with Northwest Mississippi Community College. Wilfawn also strongly considered an offer from Eastern Illinois where he had built a relationship with the coaching staff, but it was another relationship that has lasted much longer and has a more meaningful connection that made him choose the Rangers.

“(Hill) knows how to coach and I know he’s someone I can trust and that’s a big thing,” Wilfawn said. “Knowing that you can trust the coaches there is huge for me so that worked out perfectly.”

Another JUCO powerhouse picked up a commitment with CJ Terrell signing with East Mississippi Community College. He joins Lafayette’s Jamarcus Quarles, who also signed with EMCC on Wednesday morning.

Hiram Wadlington chose Itawamba Community College as his next desitination. Wadlington and Terrell are dual-sport athletes at Oxford with Wadlington playing basketball and Terrell a starting outfielder for the baseball team. Neither plans to continue that trend at the collegiate level.

“East Mississippi never talked to me about baseball, but I kind of made the decision a month ago that I wasn’t going to play baseball in college,” Terrell said. “It was tough because I’ve been playing baseball since I was in OPC, but this is a new era now and I’m ready to get started.”

A trio of Chargers are heading to Moorhead to continue being teammates. Jaquanzi Johnson, JT Owens and Dada Parham all signed with Mississippi Delta Community College.