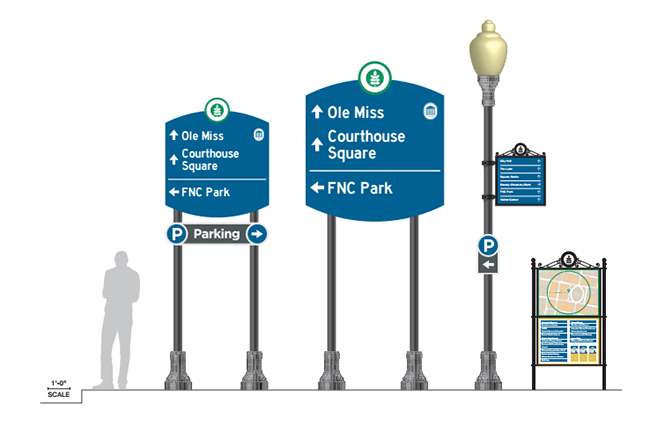 Visitors to Oxford will soon find it easier to get around town and find all of the places that make Oxford a town that draws thousands of tourists throughout the year.

The Oxford Board of Aldermen adopted a new Wayfinding Master Plan Tuesday – a 70-page document that has been worked on for almost two years by the city of Oxford and its tourism and visitor center Visit Oxford, who contracted with Civil-Link and Arnett Muldrow & Associates to develop the master plan.

The primary goal of the Wayfinding Plan is to continue to pursue and expand tourism and economic development within Oxford by maximizing the experience of existing visitors.

The overall objective includes boosting visitor engagement with local attractions, improving visitor involvement that encourages longer or future visits and promote public safety by providing directional signage to vehicular and pedestrian traffic, streamlining routes to mitigate traffic congestion, maximize utilization of public parking areas inside the historic areas of Oxford and the Downtown Square, as well as improve aesthetics by having consistent signage throughout the city.

The plan focuses on five types of new signage:

The Mississippi Hills Heritage Area Alliance awarded Oxford a $20,000 grant that will go toward the Wayfinding plan as well as the necessary signage. Visit Oxford has an additional $50,000 budgeted this year to begin the implementation of phase 1 of the signage plan.

Mark Levy, with the Public Works Department, said the city will be soon taking quotes from different sign fabricators.

“We will be doing it in phases,” he said. “But we hope to get phase one done within the next three months.”

An executive summary of the plan is available to view online here or by calling the Public Works Department at 662-232-2306.