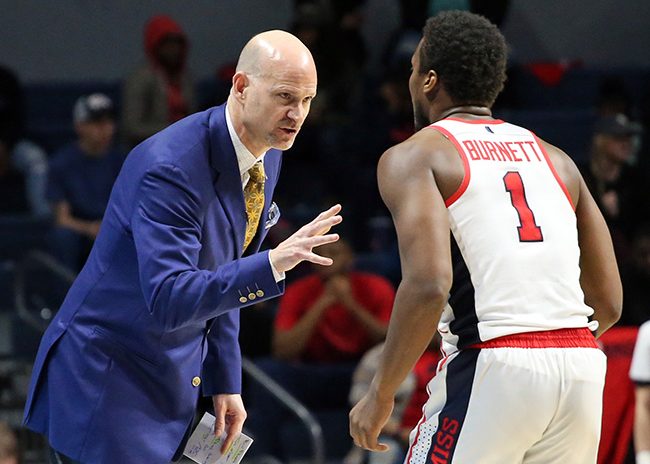 Andy Kennedy coached his 400th game at Ole Miss on Tuesday with at least six more to go, but there wasn’t any celebration.

At this point, any emotions the Rebels’ outgoing coach has about this season are on the other end of the spectrum.

In its first game since Kennedy announced his resignation effective at the end of the season, Ole Miss’ losing skid extended to six games with a 75-64 loss to Arkansas at The Pavilion. It’s the eighth loss in the last nine games for the Rebels, who haven’t won since topping Alabama at home Jan. 23.

“My words are ringing hollow,” Kennedy said. “I can’t get (to this team). I can’t reach them.”

Kennedy announced his decision to step down Monday, signaling the end of a 12-year tenure that’s yet to experience a losing season. That’s going to change barring a dramatic turnaround with the Rebels (11-15, 4-9 SEC) a season-worst four games under .500 entering the final five games of the regular season starting Saturday at rival Mississippi State.

Kennedy said he thought getting word out of his impending departure during the season would clear his players’ minds and allow them to “”go play and compete.” Instead, he was nearly at a loss after watching his veteran team again fail to make plays down the stretch in a once-competitive game that turned into Ole Miss’ third double-digit loss in its last four.

“(Monday) I tried to take about as big of an ownership as you can take. I’m the man. I’m culpable for this,” Kennedy said. “After watching our performance on Saturday (at LSU), I thought that this is as bad as I’ve seen it in my 400 games until tonight. I apologize. I certainly did not want it to go out like this.

Deandre Burnett had a game-high 22 points for Ole Miss while Markel Crawford finished with 17, but efficiency again plagued the Rebels across the board. Ole Miss shot a season-low 29 percent from the floor and just 64 percent (20 of 31) from the free-throw line.

Nine of Burnett’s points came from the charity stripe with the senior guard going just 6 of 15 from the field. Terence Davis and point guard Breein Tyree combined for just 12 points on 4 of 22 shooting while Bruce Stevens and Marcanvis Hymon each finished with four points, accounting for all eight of the Rebels’ points in the frontcourt.

The Rebels shot a woeful 17.2 percent (5 of 29) from the field in the first half yet only trailed 34-23 at the break. Ole Miss got within a basket at 53-52 with eight minutes left after a 3-pointer by Devontae Shuler, but Arkansas answered with back-to-back 3s from Darious Hall and Anton Beard, igniting an 18-1 run the Razorbacks used to take control for good.

“We’ve got good guys man. Tomorrow if I said, ‘Hey, let’s practice at 6 a.m.,’ they’d all be here and no one would be late,” Kennedy said. “We just don’t play. Not to the standard that it takes to win real games. Maybe everything that has transpired in the last 24 hours, maybe it’s just gotten to where they can’t function. I don’t know, but I certainly was not anticipating that tonight.”

Freshman forward Daniel Gafford led four Razorbacks in double figures with 19 points while Hall finished with 14 points off the bench. Jaylen Barford and Anton Beard chipped in 13 apiece for Arkansas (18-8, 7-6), which shot 50 percent (15 of 30) in the second half and turned it over just eight times against Ole Miss’ switching defenses to overcome its own 59.3-percent struggle (16 of 27) from the free-throw line.

But more than anything Arkansas did, Kennedy said Tuesday was yet another case of him failing to get through to his team the importance of playing in the moment — something that’s got his team in a tailspin with Missouri, No. 18 Tennessee and Kentucky still on the schedule following Ole Miss’ trip to Starkville.

“If you say, ‘Hey man, my coach is gone and the season is a disappointment. I don’t even want to represent Ole Miss anymore.’ Maybe you say that. These are 18- to 22-year-old kids,” Kennedy said. “But you can’t play for pride with your name? Your family’s name? You can’t play for that? I’m at a little bit of a loss. I’m sad about it and I’m disappointed. I’ve never been more disappointed in this profession in myself.

Kennedy said he didn’t know why that’s been a season-long issue with a team with more than half its scholarship players being upperclassmen, adding, “You’ll have to ask (the players).”

Burnett said they’re still trying to figure it out.

“It’s taking time for it to mesh all together,” Burnett said. “It’s hard to say that this late in the season, but we’ve just got to embrace the whole process, face it like young men and keep moving forward.”