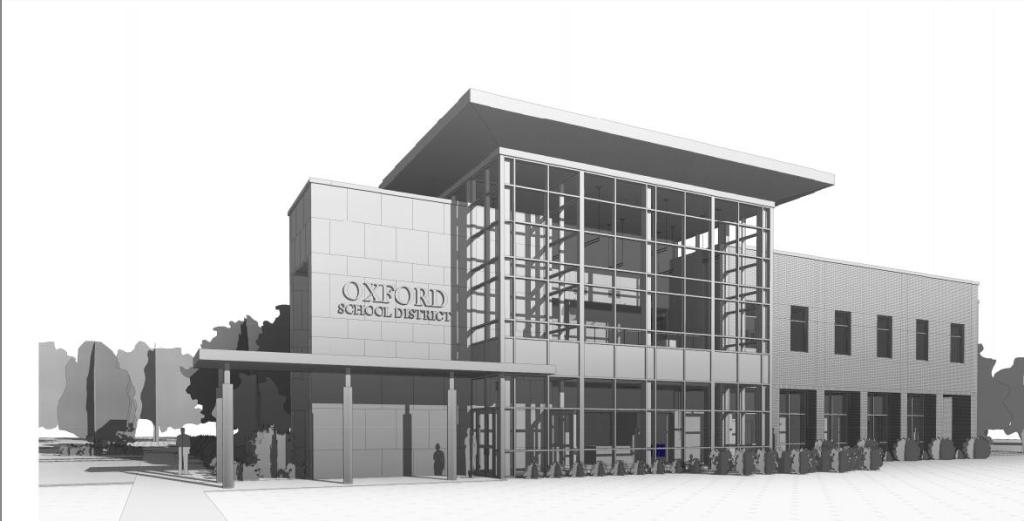 The Oxford School District had its site plan approved Monday night by the Oxford Planning Commission for a new two-story administrative office; however, when it might get built is still up in the air.

The future site for the district office is located on about 4 acres on the south side of Sisk Avenue, northwest of Della Davidson Elementary School.

The site plan does not require a traffic impact study; however, construction cannot begin until equivalent trips are made available in the Oxford Commons Planned Unit Development based on traffic recommendations from the comprehensive Traffic Impact Study for Oxford Commons that was done last year.

Additional “trips” should become available once improvements are made to the Sisk/Highway 7 interchange and/or the extension of Sisk Avenue to Highway 6 is complete.

The OSD office is No. 5 in the queue of projects that have been approved but cannot start construction due to the moratorium on adding additional cars on Sisk Avenue.

The commission unanimously approved the plan, contingent on recommendations from the city’s planning department that included the receipt of a shared access easement or similar legal means for access to Sisk Avenue; a sidewalk connecting to Della Davidson, and approval of the Storm Water Plan by the Public Works Department.

Also on Monday, the commission denied a request to remove five lots from the Oxford Commons Planned Unit Development and rezone it to the underlying Suburban Corridor and Suburban Center zoning districts.

The request was made by Kenlan Development Oxford and Rebel Hospitality, LLC. The PUD calls for those lots to have commercial businesses; however, under Suburban zoning, the developers would be able to have a mixed-use development of commercial and some residential.

The request was made originally during the January meeting of the Planning Commission.

Other property owners in Oxford Commons, including developer David Blackburn, opposed the rezoning during the January meeting. City Planner Judy Daniel said the planning department was also opposed to rezoning just five lots inside the PUD and suggested either a rezoning of the entire PUD district, or just the commercial portions, of Oxford Commons to the underlying zoning, or modifying and updated the PUD regulatory structure to correct the mistakes and to provide a better and more rational system for managing the development of residual properties at Oxford Commons.

The issue was tabled in January until Monday’s meeting, with commissioners suggesting the landowners try to come to terms.

On Monday, Daniel said the landowners could not come to an agreement and withdrew the planning department’s recommendations saying it was now up to the landowners to work out their issues.