Amid longest losing streak since 2006, Ole Miss plans to ‘come out and fight’ against Mississippi State 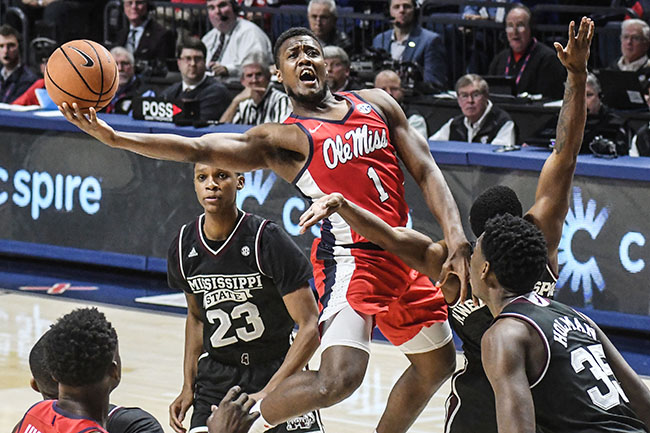 Next month’s Southeastern Conference Tournament will be the extent of Ole Miss’ postseason barring a dramatic turnaround in the final three weeks of the regular season.

At this point, the Rebels are just trying to keep their collective head above water.

Ole Miss is in the midst of its worst stretch of basketball in more than a decade. The Rebels have lost eight of their last nine games following Tuesday’s setback to Arkansas, one that extended Ole Miss’ losing streak to six — the program’s longest skid since losing six straight to end the 2005-06 season.

That’s also the last time Ole Miss had a losing season, something the Rebels (11-15, 4-9 SEC) are in danger of with just five games left in the regular season.

The Rebels’ first chance to do that comes Saturday with a trip to Starkville to take on Mississippi State (7:30 p.m., SEC Network) in the final rivalry matchup for Ole Miss coach Andy Kennedy, who announced Monday he’ll be stepping down at the end of the season. Ole Miss has won eight of the last nine in the series, including a 64-58 victory over the Bulldogs on Jan. 6 in the teams’ first meeting.

The Bulldogs (18-8, 6-7) have entered the periphery of the NCAA Tournament conversation with four wins in their last six games, including victories over fellow tournament hopefuls Missouri and Alabama, though a last-second loss to Vanderbilt on Wednesday has Mississippi State on the wrong side of the bubble for now, according to multiple bracket projections.

Ole Miss has won two of the last three meetings in Starkville, but Kennedy knows the Rebels’ recent success against the Bulldogs doesn’t have anything to do with Saturday night.

“Obviously Mississippi State is playing well,” Kennedy said. “It’s never easy for Ole Miss inside the confines of Humphrey Coliseum, and I don’t anticipate anything other than a battle on Saturday night.”

Ole Miss will have to be better in a lot of areas starting with awareness and mental toughness that Kennedy has been lamenting all season with his team. Kennedy thought his announcement earlier this week would help with some of that by liberating his team, but the Rebels’ 12th-year coach seemingly reached a new low with his frustration Tuesday following the loss to the Razorbacks after watching yet another opponent make the necessary plays down the stretch to get a win.

Arkansas ripped off an 18-1 run to take control of a one-possession game in the final eight minutes as Ole Miss’ collective shot once again disappeared. The Rebels shot a season-low 29 percent from the floor and have shot better than 40 percent just once during their skid.

“I just have tried to encourage (our players) to play with life, play the game you love, play the way that’s enabled you to be on an SEC team,” Kennedy said. “Again, I have not done a good enough job of either getting that point across or conveying the importance of, ‘Hey man, don’t go through this with regret. You’re going to regret it if you lay down. Don’t lay down. Play, play, play.’”

A loss Saturday would match the Rebels’ longest losing streak since dropping seven straight earlier in that 2005-06 season. Ole Miss would rather not give its rival the satisfaction.

“I expect us to come out and fight. One thing about this team, nobody has quit,” Burnett said. “It’s just when you’re down in the dumps, it’s hard to figure out things. We’re just trying to figure out how to get that win. I feel like when we get that win, we’ll be able to come out of it a little bit and finish out this season the way we want to. What better way to go get a win than against Mississippi State?”