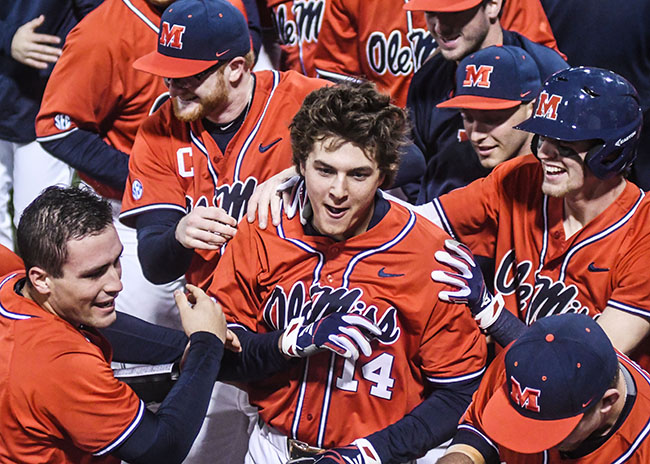 Ole MIss’ Cole Zabowski (14) is mobbed by teammates after hitting a three run home run in the 2nd inning against Winthrop at Oxford-University Stadium in Oxford, Miss. on Saturday, February 17, 2018. Ole Miss won 8-1 to clinch the series. (Bruce Newman, Oxford Eagle via AP)

Ole Miss coach Mike Bianco made three new entries to the lineup Saturday. Those additions helped keep the offense coming for the Rebels in a series-clinching win.

No. 9 Ole Miss pounded out 14 hits to take the series from Winthrop with an 8-1 win at Oxford-University Stadium. The Rebels will go for the sweep Sunday at 12:30 p.m.

After racking up 13 hits in Friday’s season opener, Ole Miss’ timely hitting continued against Winthrop right-hander Colton Rendon (0-1) and reliever Riley Arnone with all but one of its runs coming with two outs. Eleven of the Rebels’ 15 runs and 10 RBIs this season have come with two outs.

“As an offense, it’s huge, but it’s also deflating for the other team,” Bianco said. “It’s deflating when you’re an out away from finishing the inning but you can’t and somebody gets a clutch base hit. We seemed to have done it terrific tonight and last night.”

Sophomore first baseman Cole Zabowski was a catalyst in his first start of the season, getting the Rebels (2-0) on the board with a three-run homer into the right-field bullpen as part of Ole Miss’ four-run second and finishing 2-for-3 with four RBIs.

“I was just going up there trying to do some damage and get the job done,” Zabowski said.

Senior Chase Cockrell, in his first start as the designated hitter, went 3-for-3 with a double while freshman Tim Elko, getting the first start of his career at third base, drove in a run in the sixth to give the Rebels a 6-0 lead. The trio combined to go for 6-for-10 and score five runs from the bottom third of the lineup.

Freshman Michael Spears’ first career at-bat went for an RBI double in the seventh to make it a 7-0 lead for the Rebels, who’ve notched at least 13 hits in back-to-back games for the first time since the 2016 season.

“Nobody knows more than us and it’s a long season, but it’s nice,” Bianco said. “That’s neat to see. One, you’re happy and proud as a coach, but everybody likes to get off to a good start (offensively),” Bianco said.

Right-hander Brady Feigl (1-0) worked out of a couple jams to keep Winthrop (0-2) scoreless through six innings as the Rebels continued to build their lead, getting through them on 88 pitches. The junior scattered six hits, walked one and struck out six with his best work coming in the third and sixth innings.

The Eagles started the third with back-to-back singles from Connor O’Brien and Brandon Fite, but Feigl picked off O’Brien at second before getting a groundout and a strikeout to wiggle out of trouble.

Feigl retired five of the next batters before walking Fite to start the sixth to turn Winthrop’s lineup over. Leadoff hitter Scout McFalls followed with a single to put the first two Eagles on, but Feigl buckled down with his low-90s fastball and complemented it with a slider to get a groundout, a strikeout and another groundout to strand Fite and McFalls at second and third after a passed ball.

Said Feigl, “The biggest thing was just fill the zone. That’s what Coach talks about. He says that when you in those situations, just trust your stuff and go back to making pitches.”

Winthrop avoided the shutout with an unearned run in the eighth, but Greer Holston and Parker Caracci combined to throw three no-hit innings of relief. Caracci struck out two of the four batters he faced in the ninth.