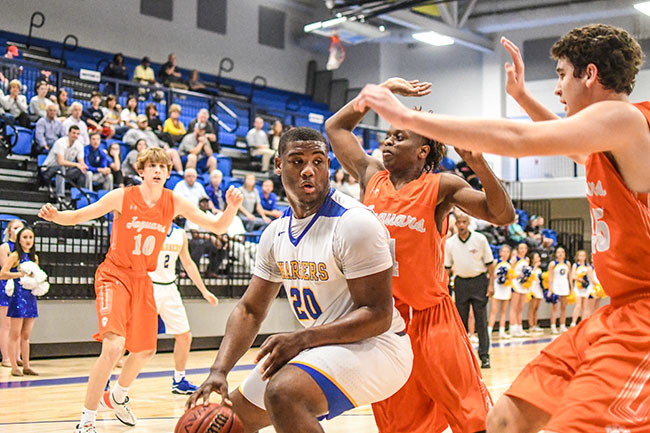 There were times Drew Tyler had ‘flashbacks’ of two of his former players on Tuesday night. Except it was not his team causing the recollections, it was the Madison Central duo of Mike Hammond and Lakwion Dixon.

The pair combined for 49 points to lead the Jaguars to a 75-63 win over the Chargers in the first round of the MHSAA Class 6A state playoffs at Oxford High School.

Madison Central (13-15) advanced to the second round and will travel to Southaven on Saturday with a trip to Jackson at stake. For Oxford, their first dip into the Class 6A pool ends at 20-7.

“(Hammond and Dixon) are big time scorers,” Oxford coach Drew Tyler said. “I had some flashbacks of Joiner and Williams playing off the dribble and being a one-two punch.”

It is only the third time in Tyler’s 21-year career that Oxford has had their season end inside their own gym.

Tyler had plans of making Madison Central play fast and work off the Chargers’ transition play, thinking it would slow down their bigs. It ended up being Oxford who got outworked by the Jaguars’ speed and transition game.

“Their ability to score willingly at times and with our almost non-existent defense felt like a snowball going down hill and just getting bigger and bigger and bigger,” Tyler said. “The Chargers couldn’t do anything about it. …we picked a bad time to play sub-par defense.”

Oxford trailed by as many as 18 points in the fourth quarter and rallied to back to within 10 with a little over five minutes to go in the game. The Jaguars went back to what had been working all game to keep the Chargers at bay.

In their first season moving up to the highest classification of Mississippi high school sports, Oxford with a record of 6-3 against their Region 2-6A opponents, including last week’s region tournament, and 9-3 against 6A opponents overall. Some of those wins include a three-game sweep over Tupelo, two wins over DeSoto Central and two wins over South Panola.

“I think we overachieved in 6A play,” Tyler said. “Some of those (wins) were on the road. When you look at 6A basketball your definitely playing against schools that have a bigger population to pull from but then again we just focus on what we have in house. What we’re going to do to get our guys ready. If that’s (against) the best 1A or the best 6A. We just kind of tend to concentrate on our talent.”