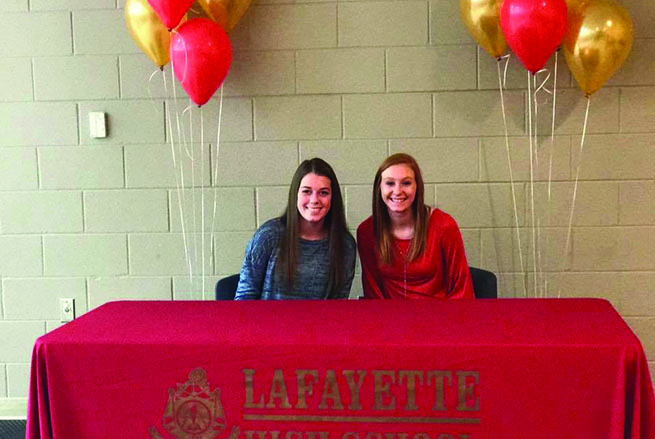 Two Lafayette teammates will continue to be teammates at the next level and each took different paths to get there.

Halle Moore and Jada Ross signed with Itawamba Community College and will play soccer in Fulton for the next two years.

Moore’s decision came down to either hanging up the cleats for good and beginning her journey to becoming a veterinarian at Mississippi State or taking the offer to play at ICC. She chose the latter.

“That was my main worry about going to State instead because I was going to have to stop playing soccer and that was a little scary,” Moore said. “I’m kind of glad the way it worked out the way it did. … I’m glad to play with (Ross) and some other girls from Oxford I know. So, it’s good to have some familiar faces.”

Another reason to continue playing soccer is it gives Moore two more years to grab Mississippi State’s attention and maybe convince the Bulldogs to find her a spot when she eventually moves to Starkville to begin vet school.

Moore was a midfielder for the Lady Commodores and would move up to forward at times, becoming a key goal-scoring threat. She plans to continue that at ICC.

It is a different story entirely for Ross, who five years ago did not see herself in the position she was in on Thursday inside the Lafayette Upper Elementary cafeteria.

When she was a seventh-grader, the dream of playing soccer at the varsity level was not a real one to her, let alone playing at the junior college level.

“To me, Jada is a really fun story to talk about,” Lafayette coach Melinda Scruggs said. “Her development from seventh grade has been night and day. She kind of struggled in soccer and other things and to see where she’s come, it’s just so much fun to see her continuing to play.”

It took an internal light to come on inside of Ross right before her freshman season to make her realize soccer was something that she could excel at as well as play at the collegiate level.

Ross became a mainstay of the Commodore defense the past couple seasons, becoming a starter at the middle fullback position. That is where the ICC coaching staff will use her the next two years.