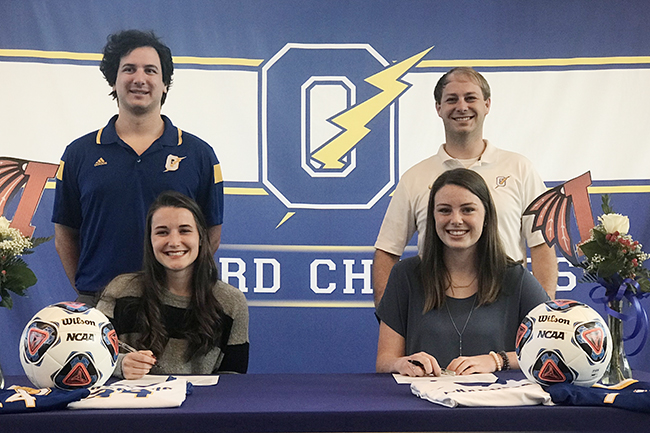 There is a pipeline being formed between Oxford and Fulton.

For the second time in a week soccer players from the Oxford-Lafayette community signed to continue their careers at Itawamba Community College this Fall.

“Oxford is a soccer community,” Oxford coach Hunter Crane said. “People around the state are starting to realize some of the best players in the state come from Oxford. …It’s nice to have that pipeline.”

The Charger duo have been key components for Crane since his arrival to Oxford three seasons ago. Crane has used them both as utility players with Shinall playing every position but goalkeeper last season. This year she finished with six goals and and was fourth on the team in assists with 11.

“We’ve had that connection since seventh grade,” Shinall said of playing with Joyce. “We work really well together. I have a lot of friends (in Fulton) and I’ve played with them for so long and that really helps. Along with the comfort level of (head coach David Strother), too.”

Joyce was Crane’s utility player this season and thrived in every spot he put her in. She finished third in goals scored with 11 and third on team with 14 assists. She, along with Shinall, helped bring the first two state championships in program history and three district titles to Oxford. They only lost one district game during their time as Chargers.

“I think the program is great and I think (Strother) is doing great things over there,” Joyce said. “So, I’m ready to get in on that. I’m not a very outgoing person, so going in knowing some people will be really nice.”

Joyce expects to be used as a forward or center midfielder while Shinally might be used on the outside, but she is up for whatever position she’s told to play.