‘I did not see this coming,’ but Ole Miss quarterback Jordan Ta’amu ready to lead 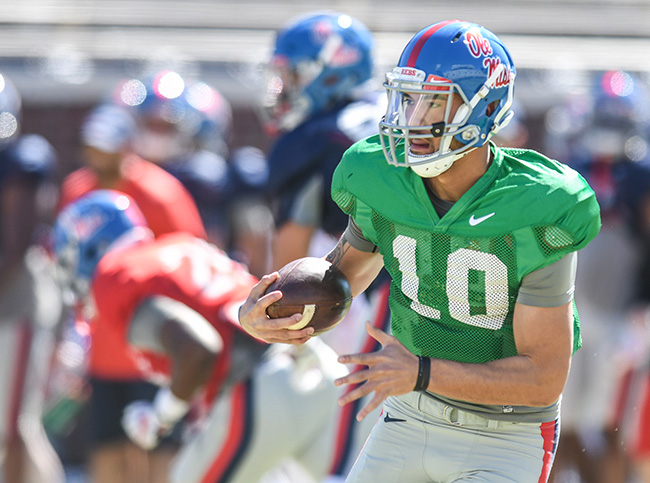 It’s something, at least on the football field, he’s working on.

That’s because, in a development that’s even caught him by surprise, Ole Miss is Ta’amu’s team now. The rising senior is going through his first spring as the Rebels’ starting quarterback after being a relative unknown this time a year ago.

Ta’amu introduced himself to the SEC over the final five games of last season, stepping in for the injured Shea Patterson to help the Rebels to a 3-2 record down the stretch capped by an upset of rival Mississippi State. The former junior college signee finished the season completing nearly 67 percent of his passes for 1,682 yards yards and 11 touchdowns against four interceptions while adding four more scores on the ground.

His performance put him in a position where he could’ve at least pushed Patterson for the starting job this spring, but once the former five-star signee transferred to Michigan after the final sanctions in the program’s NCAA infractions case were handed down in December, Ta’amu became the clear-cut guy. No other scholarship quarterback on Ole Miss’ roster has taken a snap in a game.

“At the end of the season, Jordan voiced that no matter what was going to happen, he was committed to Ole Miss and he wanted to go compete for the job,” offensive coordinator Phil Longo said. “When Shea left, I don’t think his attitude changed.”

But with everybody looking to him at the most important position on the field, Ta’amu knows his voice has to.

“I’ve just got to play my game, and I’ve got to be more vocal,” Ta’amu said. “Just got to be a leader out here. Everybody follows the quarterback, so I’ve got to lead our team.”

Making proper reads and getting the ball out quicker are facets that Ta’amu said he’s working to improve this spring, but with game experience and a more refined knowledge of Longo’s offense, he’s doing it with a different comfort level.

“He just has that confidence,” Longo said. “Things happen easier and simpler to him. The game is slower. He’s not only improving the things he needs to do, but he’s helping me prepare some of the other guys.”

Ta’amu is petitioning the NCAA for an extra year of eligibility, but he said he’s preparing for this fall to be his last at Ole Miss. He’s not taking it or his new role for granted.

“Now I’m starting in the spring, I just know I’ve always got to compete out there,” Ta’amu said. “I’m not going to take it easy. It’s just really good because everybody listens and everybody respects me.”

• Ole Miss wrapped up its first week of spring practice with a two-hour workout Saturday inside Vaught-Hemingway Stadium.

• Receiver A.J. Brown and offensive lineman Greg Little were not at practice Saturday. Both are in Indianapolis attending an educational symposium for rising juniors that are projected to be future first-round draft picks. The symposium, a joint venture between the NFL and the NCAA, runs through Sunday.

• Redshirt freshman defensive back A.J. Harris was carted off with what a school spokesperson called an illness. Armani Linton, who’s moved from defensive back to running back this spring, did not practice.