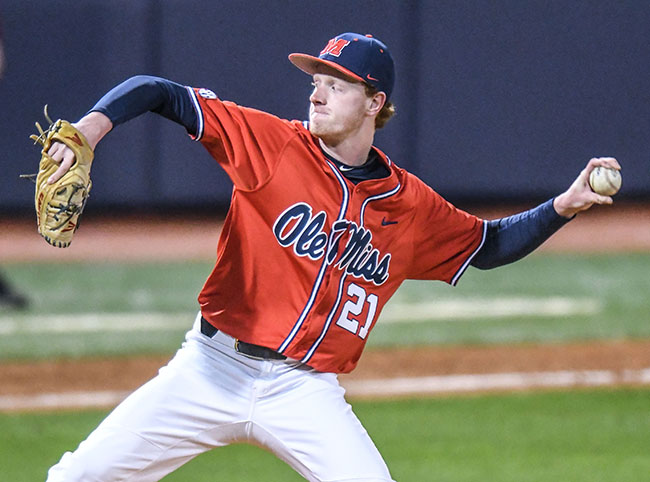 The ninth-ranked Rebels broke out late to ease past Little Rock 10-2 on Wednesday at Oxford-University Stadium. Ole Miss will wrap up its five-game homestand with a series against Eastern Illinois starting Friday at 6:30 p.m.

A night after using a six-run eighth inning to pull away from Austin Peay, the Rebels (12-1) put up a four-spot in the seventh against Little Rock (6-7) and scored four more in the eighth to turn a 2-2 tie into another rout. Ole Miss, which has scored double-digit runs in three straight games for the first time since 2009, has outscored its opponents 37-10 during its four-game winning streak.

“We’ve had some good at-bats,” Ole Miss coach Mike Bianco said. “Tonight we only get nine hits, but we get (eight) walks. Once they made an error to open up the door, we were able to capitalize. It seems like that’s what we’ve been able to do is really bunch some at-bats together.”

That error came in the seventh when Eldridge Figueroa’s relay throw in an attempt to complete a 6-4-3 double play on Grae Kessinger bounced past first baseman Riley Pittman, allowing Tyler Keenan to trot home with the go-ahead run after Little Rock drew even an inning earlier on Matt Merino’s two-run homer off Greer Holston.

The homer took freshman Jordan Fowler out of consideration for a win in the first career start for the left-hander, who was drafted in the 26th round out of high school by the Texas Rangers last summer.

Fowler got some help from his defense to face just two over the minimum in five innings despite scattering four hits and walking one. Golsan gunned down Pittman trying to advance to third on Troy Alexander’s single to end the Trojans’ half of the first. Fortes threw out Nick Perez trying to steal second after his one-out single in the second before Kessinger started a 6-4-3 double play to end the top of the fourth.

But Little Rock didn’t make much contact otherwise against Fowler, who racked up six strikeouts through the first three innings and finished with seven. He ended his night by getting James Gann swinging to strand a runner at third and preserve Ole Miss’ 2-0 lead at the time.

“You couldn’t draw it up any better. You walk out there and throw five shutout innings, seven strikeouts, and all four pitches in the strike zone,” Bianco said. “I say the phrase a lot: Play like you belong and pitch like you belong. And he certainly looked like he belonged tonight.”

Fowler, who hadn’t gone longer than two innings in any of his first three relief appearances, has allowed just one earned run with 11 strikeouts in 8 1/3 innings this season.

“Hitting spots, making pitches and throwing strikes basically,” Fowler said. “I felt good. I’ve been starting my whole life. It’s something I’ve been able to do.”

Parker Caracci (2-0) came on for Ole Miss in the seventh and struck out five of the seven batters he faced in two innings. Max Cioffi retired the Trojans in order in the ninth.