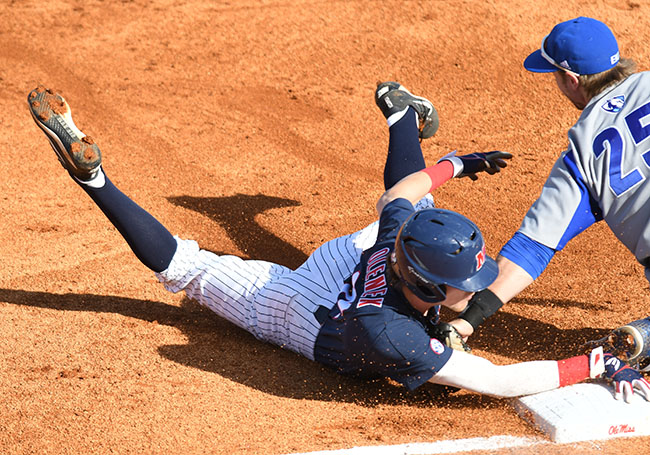 Ole Miss’ Ryan Olenek (2) advances to third on a wild pitch as Eastern Illinois’ Dougie Parks is late with the tag, at Oxford-University Stadium, in Oxford, Miss. on Friday, March 9, 2018. (Bruce Newman, Oxford Eagle via AP)

Ole Miss’ bats have made a habit of breaking out late during its winning streak.

The Rebels flipped that script en route to another one Friday.

No. 9 Ole Miss scored six runs through its first three-at bats, setting the tone for a 7-2 win over Eastern Illinois in the first game of the teams’ doubleheader at Oxford-University Stadium. The Rebels will go for their fourth straight series win and sixth straight victory in the nightcap, which will start at approximately 6:30 p.m.

Thomas Dillard and Jacob Adams each hit solo homers for the Rebels (13-1), who immediately tagged EIU right-hander Alex Stevenson (1-2) for four runs in the first and led 6-0 to back another strong outing from Ryan Rolison before the Panthers (5-6) plated their only runs in the fourth.

Adams’ first home run of the season was one of two hits for the junior college transfer. Dillard’s solo shot to deep center in the third was his third homer this week and his team-leading fourth of the season, matching his long-ball total from all of last year.

Designated hitter Chase Cockrell had two RBIs, knocking in Ole Miss’ final run with a single in the seventh to raise his average to a team-best .480. Nick Fortes and Tyler Keenan each drove in a run for the Rebels, who chased Stevenson after just 3 ⅓ innings.

It wasn’t the cleanest outing for Rolison (3-1), but the sophomore left-hander avoided the big inning to turn in his longest outing of the season. EIU put the first three batters on in the fourth and cut into the Rebels’ lead with Andrew Curran’s two-run single, but Rolison got a fielder’s choice and a flyout to limit the damage.

Rolison retired eight of the next nine batters he faced before ending his day with a strikeout of Matt Albert with two on to end the top of the seventh. He scattered six hits, walked three and struck out eight.

Sophomore Austin Miller struck out four in two innings of hitless relief in his third appearance of the season.