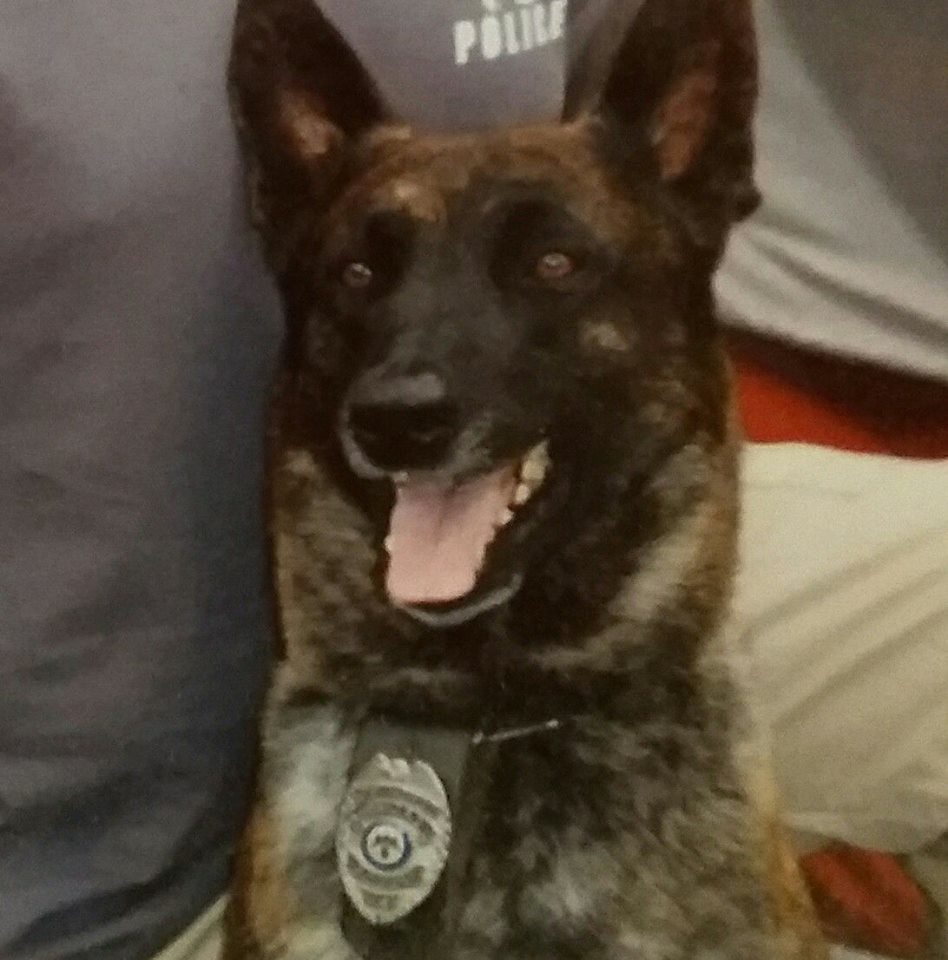 For more than four years, Oxford Police Department’s K9 dog Major helped apprehend criminals thinking they could escape the long arm of the law. He sniffed out narcotics hidden by drug dealers and charmed crowds during demonstrations of his skills.

For 10 years, he’s also been a loyal companion and friend to his handler, Lt. Steve Lewis.

On Tuesday, Lewis and his family had to say goodbye to their cherished furry family member when Major died due to complications from heartworms.

Major, a Dutch shepherd, was assigned to Lewis in 2008 and the two worked together until 2012 when Major retired.

“I was promoted to sergeant and so Major was retired,” Lewis said. “He was already five years old and it would take another year for him to adjust to a new handler so they let him retire and remain with me. He was already having some issues with his hips. K9s work hard and the work can take a toll after a few years.”

Major became a pet and enjoyed his life of leisure with Lewis, his wife, Melanie and their two children.

“He was spoiled rotten,” Lewis said, chuckling softly. “He just relaxed and laid around and enjoyed life.”

Despite being given heartworm prevention every month, Major still contracted the parasites.

“We had to document everything, which was a good thing, because the company that made the heartworm prevention paid for his first treatment,” Lewis said.

However, even the best heartworm treatments generally only stall the process. Major’s health deteriorated over the last year. No longer wishing to watch his beloved dog suffer, the decision was made to put Major down.

“My vet, Dr. Lee Payne and everyone at the Animal Clinic of Oxford were really professional and caring and respectful,” Lewis said.

Major was laid to rest in the K9 cemetery, located on a hill that overlooks the F.D. “Buddy” East Training Complex. The area was dedicated as a cemetery for all local K9s two years ago. In the cemetery is a large, marble marker that reads, “My eyes are your eyes — to watch and protect you. My ears are your ears — to detect evil minds in the dark. My nose is your nose — to scent the invader of your domain. So that you may live, my life is yours.”

Lewis worked at OPD in 1995 through 1997 and then became a game warden with the Mississippi Department of Wildlife until 2007 when he returned to OPD. He was given Major when he just about a year old and the two spent about six months together before Major was officially put to work. They spent the time learning about each other and learning to trust each other.

“You have to get to know them – how they alert, their little hints and clues they give,” Lewis said. “It takes a little time and effort to get used to each other.”

Major did mostly narcotic detection work; however, he was often put out to search for people.

“There was a bank robbery in Water Valley a few years ago and the suspect was hiding out in a trailer on Woodson Ridge Road,” Lewis said. “Me and Major went out there and the suspect ran out the back door into the woods, but Major caught him and we apprehended the suspect.”

Lewis said that while he and his family are grieving the loss of Major, he is thankful for the years they had together – both as a partner and as a member of his family.

“He was my child, my teddy bear, my peace of mind while I was on duty,” Lewis wrote in a memorial to Major. “He was my eyes, ears, and nose in the dark and places I couldn’t see. He was a partner to be proud of as he won the Narcotic Detector Dog Competition in his prime. He had a nose that never quit. He was well trained and well behaved, the most obedient dog we’ve ever had and will ever have. He always looked at me with the most adoration. He was my children’s sibling, playmate and peace of mind while on duty with their Daddy.”