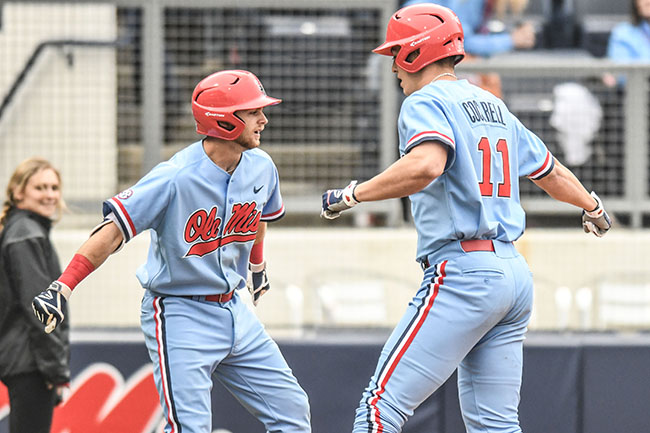 Head coach Mike Bianco and his staff often talk about the week that was for Ole Miss being as much about themselves as their opponents.

Coming off the high of a series win at projected regional participant Long Beach State last weekend, No. 9 Ole Miss returned to Oxford-University Stadium for a five-game homestand that wouldn’t help much with wins but would be RPI killers and blemishes on the postseason resume if the Rebels tripped up. Austin Peay, Little Rock and Eastern Illinois, teams far less synonymous with success in college baseball, began the week just a combined three games above .500.

Ole Miss handled the step down in competition perfectly.

The Rebels followed their midweek wins with a sweep of Eastern Illinois on Sunday, taking the series finale 7-3 to cap an unbeaten week. Ole Miss (15-1) will try to extend its seven-game winning streak when it travels to Georgia State for a pair of midweek games starting Tuesday before Tennessee comes to Oxford to open SEC play Friday.

“The coaches preach a lot about we’re not playing the other team, we’re playing ourselves,” designated hitter Chase Cockrell said. “Just play the game the right way and it’ll take care of itself.”

Ole Miss won this week’s games by a combined score of 39-11 and outscored Eastern Illinois 18-5 over the weekend, trailing just once all week. That deficit came Sunday when EIU’s Dougie Parks took James McArthur deep in the second inning to put the Panthers (5-8) up 1-0, but Ole Miss quickly answered with a four-spot to take the lead for good. EIU got within two in the fourth and fifth with two more solo home runs off the junior right-hander, but Ole Miss got those runs back with a solo shot from Chase Cockrell and a sacrifice fly from Will Golsan to take a 6-3 lead into the sixth.

“It’s a sign of a good club,” Bianco said. “Every time that they scored, we were able to answer back. It kind of keeps the momentum in your dugout.”

Cockrell capped a torrid four-game stretch with another solo homer in the sixth, finishing the day 3-for-3 with three runs scored. He went 8-for-11 with four RBIs this week to bump his average to a team-best .559 through 31 at-bats.

“Just laying off pitches and just being more selective at the plate,” Cockrell said. “I would say just working constantly. I changed my approach from last year. Staying middle-away on the field and not getting too big and staying within myself.”

Thomas Dillard had a pair of doubles, hitting .571 on the weekend while also drawing five walks and scoring five runs. Grae Kessinger and Ryan Olenek each had two hits and combined for three RBIs from the top of the lineup for the Rebels, who hammered out 10 hits against starter Carson Haws (1-2) in 4 1/3 innings and finished with 13 against four EIU pitchers, feasting on a Panther staff short on quality arms.

Despite the three homers, Bianco called Sunday’s outing the “best outing of the year” for McArthur (2-0), who allowed just one other hit in 5 1/3 innings. McArthur, who began the day with a staff-best 0.59 earned run average through his first three starts, retired 12 of the first 14 batters he faced and walked just one while striking out four.

His lone free pass was issued with two outs in the fifth to Andrew Curren, who moved to second on a passed ball to threaten to cut into the Rebels’ 5-3 lead at the time. But McArthur got some help avoiding further trouble when second baseman Jacob Adams stretched out to snag Joseph Duncan’s liner in short right field to end EIU’s half of the frame.

Will Stokes came on for McArthur in the sixth and induced an inning-ending double play to strand a runner at third, and EIU mustered just two more hits against Stokes, Parker Caracci and Dallas Woolfolk over the final three frames. It extended the bullpen’s scoreless streak to 10 2/3 innings and put the finishing touches on a dominant week for the Rebels.

“When you look back at these four weeks, we’ve played well in a lot of different areas,” Bianco said. “There’s not one area where you say, ‘Hey, we’ve done well in this area but in this area, we haven’t.’ We’ve pitched it well. We’ve swung it. We’ve run the bases. We’ve really defended well. Happy with the way we’re playing. We want to continue to play at a high pace like that.”