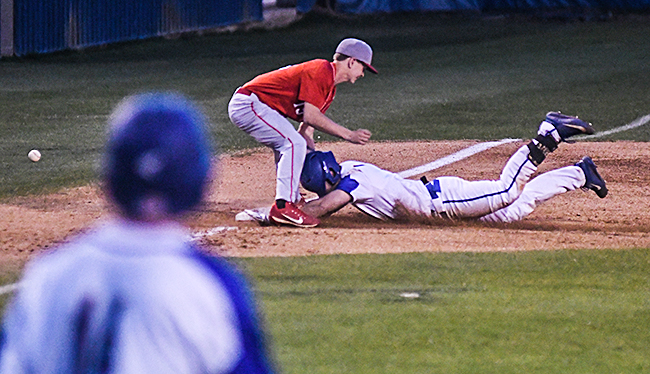 Oxford High's Drew Bianco (1) is safe at third and gets up to eventually score as the throw gets past Lafayette High third baseman Wilson Varner at Edwin Moak Field in Oxford, Miss. on Thursday, March 15, 2018. Oxford won 11-5. (Bruce Newman, Oxford Eagle via AP)

When the gloves have failed them the bats have not. That was the case on Thursday for Oxford in an 11-5 win over crosstown rival Lafayette at Edwin Moak Field.

The game was the final one of the Oxford Spring Break Tournament and was the first of two between the Chargers and the Commodores this season. The second game will take place on March 24 at Lafayette.

Oxford (8-4) committed seven errors in the second of their two games on Thursday. They defeated Caledonia 15-3 in five innings in the first game of the day to go a perfect 4-0 on the week.

“We’re not very good defensively but we’re pretty good offensively when we have good at-bats and control the barrel,” Oxford coach Chris Baughman said. “We can’t give up a touchdown in the (error) column in division play. It’s become mental now.”

The offense came alive for the Chargers after Lafayette (5-4) put up four runs in the top half of the first inning. Oxford responded with three runs in the home half of the frame and outscored the Commodores 11-1 the final 6 1/2 innings.

First baseman Jacob Melendez went 3-for-3 and had 4 RBIs, including a two-run home run in the fourth inning to tie the game at 5-all. Catcher Clay Ivy also went 3-for-3 with 1 RBI. CJ Terrel went 2-for-3 with a run scored and designated hitter Bo Gatlin went 2-for-4 with an RBI and a run scored. Oxford finished with 10 doubles off 13 hits.

It was not the best night on the mound for Tyler Smith. The Charger had a rough outing after having a couple successful outings in previous appearances. Smith managed to last five innings, giving up four runs on five hits and walked five but struck out nine Commodore batters. He threw 108 pitches.

“This game will humble you in a heartbeat,” Baughman said. “(Smith’s) had three or four really good starts where he just commanded everything and blew by everybody and I thought Lafayette did a really good job at the plate against him. He didn’t have his off-speed stuff and that hurt him. That hurt us all week.”

Hays Roth pitched the final two innings in relief to earn the save when the game was 8-5 in the sixth inning.

The offense left Lafayette after hot start in the first inning. After a run in the second the Commodores were shut out at the plate. It also caused them to strand 11 base runners.

Commodore catcher Marshall Merchant went 2-for-4 with 2 RBIs while third baseman Wilson Varner and first baseman Austin Wilson went 1-for-3 at the plate. Wilson recorded the other 2 RBIs for Lafayette.

“We put some balls in play and put a little pressure on them,” Lafayette coach John Walker said. “It was a great start for us. The story of the game from out point of view was mis-locating pitches. We just couldn’t locate enough pitches and down the stretch we couldn’t do enough offensively and they made us pay dearly. …We’ve not been able to get runners in. If we got half of those in we’re in a ballgame in the seventh inning.”

Oxford closes out the week with a came against Cabot High School out of Arkansas at 3 p.m. on Saturday and Lafayette’s next game will be against visiting Grenada on Tuesday to open up Region 2-5A play.

Ole Miss, bidding for best start ever, set for…