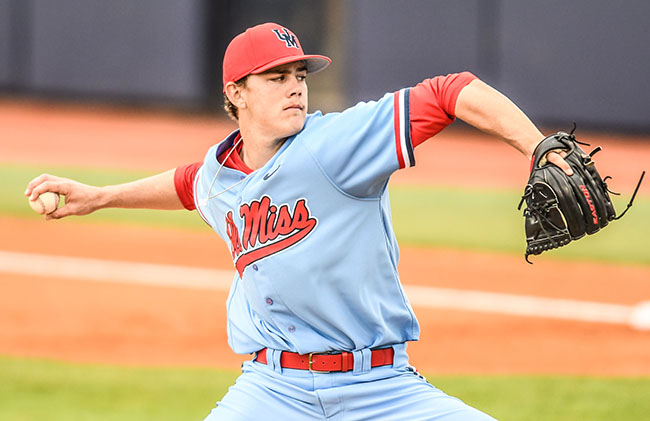 Ole Miss’ top everyday hitter was out of the lineup on Sunday and they needed someone to step up. That was Jacob Adams who continued his big weekend at the plate in the No. 11 Rebels’ 5-0 win over Tennessee at Oxford-University Stadium.

It was the second-straight win for Ole Miss (19-2, 2-1 Southeastern Conference) after falling to Tennessee (13-8, 1-2) in Friday’s SEC opener and ending a nine-game winning streak.

Starting shortstop Grae Kessinger was out of Sunday’s lineup due to a hamstring injury and Adams was moved from the nine-hole to the leadoff spot. It did not take long for the junior college transfer to make an impact, hitting his second home run of the season in his first at-bat in the first inning.

The rest of the Rebel offense came from Thomas Dillard who hit his team-leading fifth home run of the season with a two-run shot in the eighth inning. Right fielder Ryan Olenek and Cole Zabowksi recorded RBIs with Zabowksi’s coming off a solo home run in the sixth inning.

On the mound it was a dominant day for Rebel pitching. Sunday starter James McArthur worked six scoreless innings of two-hit baseball, walking three and striking out four batters. He faced just six over the minimum. He picked up his third win of the year and remains undefeated.

In relief Parker Caraccci worked the final three innings and started by striking out six of the first seven batters he faced. The redshirt sophomore finished with seven strikeouts in 11 batters faced and did not issue a walk as he picked up his first save of the season.

“Just filling up the zone with a fastball. A whole lot of fastballs today,” McArthur said. “Just attacking hitters. I felt real strong all day. …we have a really talented staff as far as pitching goes. We had Parker come out and dominate. The depth on our staff is just huge. We always know that we have a chance.”

Closer Dallas Woolfolk did not pitch all weekend and the Rebel pitching staff allowed one run in the final 20 innings of the series after giving up eight on Friday.

There is no timetable on a return for Kessinger. The starting shortstop had a chance to play on Sunday but after running on it prior to the game the training staff and Ole Miss coach Mike Bianco opted to hold him out.

“(Kessinger’s) strength’s there which is good,” Bianco said. “We thought before he went out and really tested it that he was probably going to play. I say that with the feeling that I don’t think it’s going to be long. We’ll see on Tuesday.”

Anthony Servideo filled in at shortstop. The freshman committed one error early when he was unable to snag a floater but was clean the rest of the game. At the plate he went 1-for-3.

Kessinger could return in the Rebels’ game against New Orleans on Tuesday at 11 a.m. but more likely to return in their series at No. 10 Texas A&M beginning on Thursday.