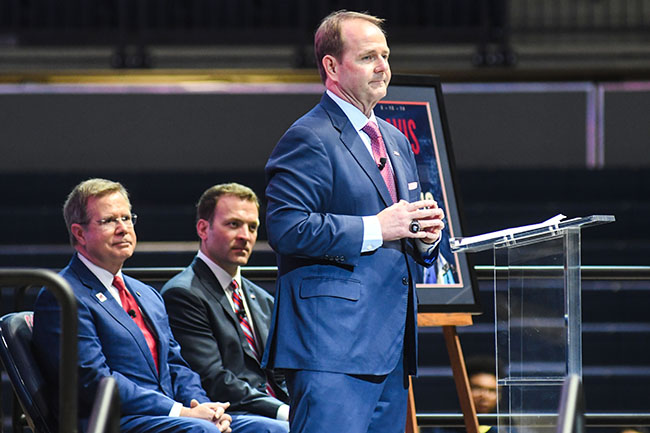 Ole Miss’ new basketball coach is most known for his work the last 16 seasons in turning Middle Tennessee State into one of the top mid-major programs in the country, but Davis likely would’ve landed at the college game’s highest level much earlier if not for an NCAA investigation that nearly derailed his career.

Davis was a rising star in the profession 28 years ago, becoming the youngest Division I coach when he took over at Texas A&M, then a member of the old Southwest Conference, in 1990 at the age of 30. The Aggies went 7-21 in their only season under Davis, but his departure had little to do with A&M’s performance on the court.

Davis was forced to resign after an investigation found Davis broke NCAA rules in his recruitment of Syracuse transfer Tony Scott. An internal investigation was also conducted by A&M and found that Davis used street agent Robert Johnson to recruit Scott, which included hundreds of phone calls between Johnson and Davis and Johnson accompanying Scott on a visit to A&M’s campus, according to United Press International. The school’s report also found Johnson used Davis’ car and cell phone when the two visited another potential recruit together.

Sanctions included probation for both A&M and Syracuse, a one-year postseason ban for both programs and a two-year show-cause penalty for Davis that was eventually amended upon appeal.

Ole Miss athletic director Ross Bjork said the school read the NCAA’s infractions report from that case and “checked into it through other sources.” Bjork said he and Davis also had a “very direct conversation” during the interview process in which Davis owned his transgression of nearly 30 years ago.

Davis hasn’t had any run-ins with the NCAA since, which Bjork said was the most important factor when evaluating the lone smudge on Davis’ resume.

“It was all consistent,” Bjork said of his talk with Davis. “He was accountable, he took responsibility, and he knew it was a mistake. He was held responsible for it, and he’s never had anything since. That’s the biggest factor. What has he done in the last three decades since that thing was three decades ago. He knows what the expectations are around these issues.”

Davis’ hire comes at a time when some of the sports’ high-profile programs and players are in the crosshairs of an FBI investigation into illegal recruiting practices. Ole Miss is also dealing with the fallout of a years-long NCAA probe into its football program, which is looking at an additional bowl ban for next season unless the penalty is reduced upon appeal.

Davis spent three years in the junior college ranks following his cup of coffee at A&M before spending two seasons as an assistant at Utah State. Davis then returned to Idaho for a second stint as the Vandals’ head coach — he led Idaho to back-to-back NCAA Tournaments in his first head coaching job in the late 1980s — before joining LSU’s staff as the associate head coach in 1997.

He got the job at MTSU five years later before Ole Miss came through with the kind of opportunity Davis said he “hoped they would offer me.” Bjork said he felt comfortable enough that an error in judgement nearly three decades old wasn’t going to prevent Davis from getting it.

“What happened from his standpoint? What happened by reading the reports? What happened when we talked to people?” Bjork said. “We double and triple checked with the NCAA to talk about current issues. That’s the biggest thing is what’s happening now and what happened at that point in time and how he dealt with it.

“He knows the state of college basketball now, and in my mind, we couldn’t have had a more safe hire in terms of compliance than him because, just like us, he doesn’t want to go through that situation again.”