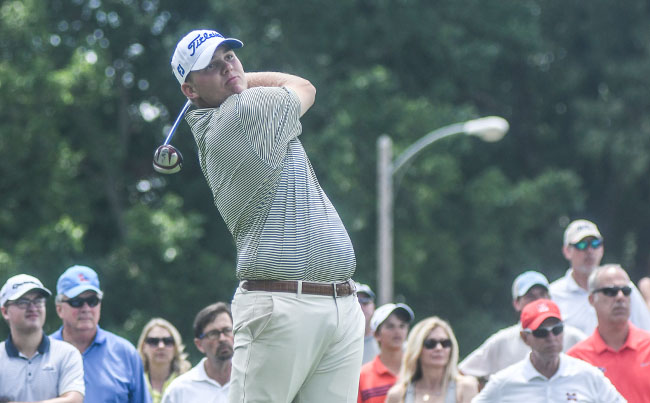 Golf has become a buzzy sport in Oxford over the last nine-plus months thanks in part to the play of the Ole Miss men’s golf team, and in particular Braden Thornberry. The reigning NCAA individual champion has played all over the country with stops in Memphis, Los Angeles and will take his talents overseas to France later this summer to represent the United States in the Arnold Palmer Cup.

Before he does that, Thornberry will put his talents on display a bit closer to home. The 2017 Fred Haskins winner committed to play in the Web.com Tour’s North Mississippi Classic on Tuesday. It is the newest addition to the tour and Oxford’s first ever professional event. The tournament runs from April 19-22 at the Country Club of Oxford.

It is the fourth PGA Event Thornbery has played in, dating back to last June’s FedEx St. Jude Classic where he placed Top-5 in his Tour debut.

“There’s so much more connection (in Oxford),” Thornberry said of playing in the inaugural event. “The whole athletic program. I have friends who are other student athletes who I’m sure will come out and support. …it’s going to be really cool to see who comes out and supports me.”

Thornberry received one of the two unrestricted sponsor exemptions and will join the 156-player field next month.

A large portion of the field has been filled already with some marquee names coming to Oxford. Former PGA stalwarts such as Stuart Appleby, Brendon de Jonge, 2003 PGA Championship winner Shaun Micheel and rookie Sam Burns highlight the list of committed players.

“I think sometimes with a new event there’s a gradual build up to the actual day,” said Steve Jent, Executive Director of the North Mississippi Classic. “I’m not sure until we have the first event if everyone will understand how big a deal this is. …it’s neat for us to have a local tie from the northern part of the state and be able play in this event. I think it’s real fortuitous for us. It’s great for people to come out and see Braden compete.”

Adding this to Thornberry’s calendar makes for a full April. The Ole Miss golf team was already competing in three events that month, including the Old Waverly Intercollegiate at West Point on April 16-17 then the Southeastern Conference Championship in Sea Island, Georgia at the end of the month. The North Mississippi Classic will be sandwiched in between.

“I think it’s great,” Ole Miss coach Chris Malloy said of the schedule. “I think you have to get the right guy. You have to know your player. …he thrives in that environment and it’s really tough. There’s a lot of guys who can play too much golf. That isn’t one of them.”

The Rebels will head out to South Carolina this weekend to compete in the Hootie at Bull Bay in Charleston starting on Sunday.