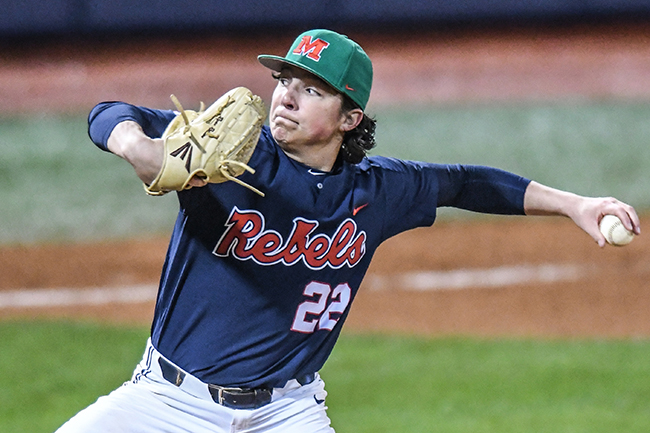 Ole Miss and Texas A&M have hit just about everything thrown at them this season.

But runs could be at a premium this weekend with both teams going up against a collection of arms that’s unlike anything they’ve seen to this point.

Ole Miss will take its resurgent offense to College Station for a top-15 showdown in its first SEC road series against A&M. It starts tonight with a 6 p.m. first pitch at Blue Bell Park (SEC Network). Friday’s game is set to start at the same time (SEC Network) before the teams wrap up the series Saturday at 2 p.m.

“They’re very similar to us statistically where they do a lot of things well,” Ole Miss coach Mike Bianco said. “They pitch it really, really well. The three starters are outstanding. I think all three of them have ERAs under 2, and offensively they can put runs on you in bunches.”

A year after finishing in the bottom half of the SEC in many offensive categories, No. 5 Ole Miss (20-2, 2-1 SEC) is fifth in the league in batting average (.300) and in the top 40 nationally in hits (214), home runs (26), slugging percentage (.488) and on-base percentage (.396) through the season’s first month. Designated hitter Chase Cockrell leads the way with a .436 clip while the Rebels have three other .300 hitters in second baseman Jacob Adams (.359), outfielder Thomas Dillard (.342, team-leading six HRs) and shortstop Grae Kessinger (.375), whose status for this weekend is uncertain after missing the last two games with a hamstring injury.

A&M (18-4, 1-2) will try to combat that with a staff that enters the weekend fifth nationally in earned run average (2.32) while limiting opponents to a .207 average, the second-lowest clip in the SEC. The 12th-ranked Aggies, who dropped their first league series at No. 9 Auburn last weekend, are paced by their weekend rotation of Stephen Kolek, left-hander John Doxakis and and Mitchell Kilkenny, who are a combined 11-2 with none of them having an ERA higher than 1.65.

“I think everybody kind of has that understanding that it’s going to get a little bit more difficult, but you try not to make too much out of it because you can psyche yourself knowing the guys are throwing a little bit harder,” Dillard said. “They’re all throwing fastballs, curveballs and changeups just the same as anyone else, so you’ve just got to go out there and compete with them just like midweek and non-conference games.”

Of course, Ole Miss’ arms make it one of the nation’s best pitching matchups this weekend.

The Rebels, who are limiting opponents to a .214 average, are just ahead of A&M with an SEC-best 2.11 ERA while leading the nation in strikeout-to-walk ratio (4.22-to-1). They’ll try to cool off an A&M offense that also comes in hitting .300 on the season with 240 hits, which is tied for sixth-most nationally.

The Aggies have one of the SEC’s hottest hitters in junior infielder Michael Helman, who enters the weekend on a 15-game hitting streak.

A series win would help either team keep early pace in a rugged Western Division that begins the weekend with five consensus top-20 teams.

“They’ve got a good staff and they’re a top-(15) team. These are things you look for when you commit to Ole Miss,” Dillard said. “You want to play teams like this, so we’re looking forward to the challenge.”

Ole Miss’ Kermit Davis: ‘Our guys will have a…