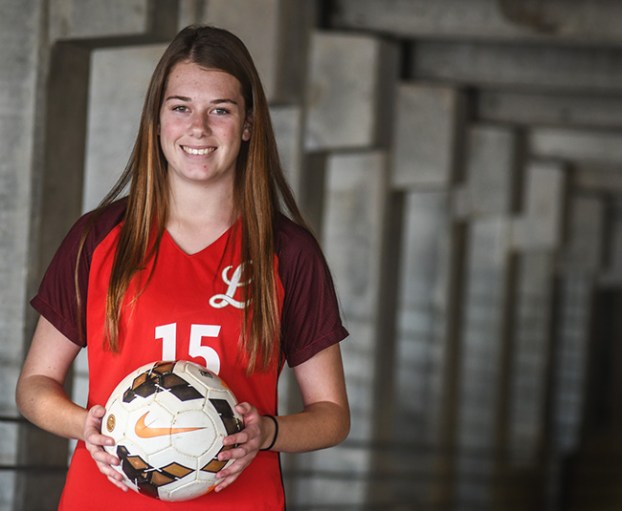 Halle Moore, in Oxford, Miss. on Thursday, March 22, 2018, is the Oxford Eagle's soccer player of the year.

Lafayette stepped up in classification this season and after winning a state title three years ago in Class 4A it was going to be a tougher task to get back there in Class 5A. The Lady Commodores were going to need a leader, or leaders, and Halle Moore became one of them.

The senior turned in what was an unexpectedly successful offensive season statistically, helping her be named the 2018 EAGLE Player of Year.

“I had a good year,” Moore said. “It was really fun because I just love all my teammates. We had a good time together and we had some good wins and overall I thought we played pretty good and had a good season.”

It was an unexpected season not because Moore was not capable of finding the back of the net, but more she was not planning to be the focal point of the offense when the season began. As games ticked on the Commodores — who made it to the second round of the Class 5A playoffs — realized Moore was whom they needed to hook their wagon to if they wanted success.

“Hands down Halle, whatever you would want out of a senior she did that for us,” Lafayette coach Melinda Scruggs said. “The ultimate team player, very humble. …she really showed out this season. You hope that from your seniors. There were some games where literally she was just exhausted because she put so much into it.”

For Moore, she just wanted to have a solid final season in hopes of getting that offer to continue playing at the next level. In the summer and offseason between her junior and senior years Moore went to work in improving her skills.

“I guess (I wanted to work on) getting more shots off,” Moore said. “I’m not a selfish person and last year I just liked to pass and keep possession. This year I started taking a lot more shots and try and get some goals for us. I used to be more defensive but this year I started being more attacking.”

It paid off two-fold with Moore scoring 13 goals and earning a scholarship to Itawamba Community College. She committed to play for ICC after deciding to put off veterinarian school for a couple more years in order to keep playing the sport she loves.

“I think I just need to work hard to get back in shape first but I think it’ll be fun to play at ICC,” Moore said. “Hopefully I’ll play good.”

“(Emma and Halle) together, we always joke about how they never have to speak to each other,” Scruggs said. “They always know what they’re going to do all the time. The two of them are definitely going to be hard to replace.”

Defensively, Lafayette put the clamps down with 12 shutouts this season. Opponents averaged less than a goal a game (0.96 goals per game). The defensive wall of Ross — who is joining Halle at ICC — Sara Grace and Bayleigh were key bricks in said wall.

“(Ross) was just one of those in the middle who kind of held down the fort,” Scruggs said. “Together collectively they were able to do great things in terms of not letting many balls get through. Jada’s speed helped us. If balls did get behind she’s just really, really fast and able to catch up to players.”

In search of their third state championship in as many seasons the Lady Chargers had a challenging first year in Class 6A. The year did not go how they had hoped — losing to Madison Central in the first round — but it was viewed as a year of growing by head coach Hunter Crane.

It was not a record-breaking year like her freshman campaign where she scored over 50 goals, but O’Connor still dominated on the pitch and had 11 more goals than the next player on the team. She finished with 26 goals and nine assists.

“She didn’t have the year that she was looking for but when you still go out and do what she did it’s still special,” Oxford coach Hunter Crane said of O’Connor. “To kind of come into 6A soccer and not play your best and still almost score 30 goals is still impressive. She’s the spark plug of our team.”

Joyce was another threat offensively for the Chargers with 11 goals and 14 assists, which was good enough for third best in assists on the team. Mills led the team with 17 assists to go with her seven goals.

“Grace Joyce played all season a little banged up here and there and just gutted it out for her senior year,” Crane said. “Coming back to 6A is just a little bit different style of soccer and to come in and do what they did all season long was special.”

Hayward was the next best weapon for Oxford behind O’Connor with 15 goals and seven assists.

Replacing Bailey O’Connor in goal was going to be a tough job for anyone who had to fill her shoes in the goalie box. That job fell on the Trost’s shoulders and she thrived with the pressure. In 20 games played the sophomore had 100 saves and allowed 29 goals, averaging five saves per match and allowed 1.45 goals per match.

“(Trost) stepped in and won the starting job and to replace Baily O’Connor is not easy to do,” Crane said. “Bailey is the saves leader at Oxford and to replace her is a little daunting. They had a great relationship. She got to see (O’Connor) for two years. I pulled her up Christmas of her eighth grade year and to be able to see how Bailey kind of went about her work helped AK get ready for this year.”

Ole Miss’ Kermit Davis: ‘Our guys will have a platform for freedom of speech and freedom to voice their opinion…

Hitting on everything from his Mississippi roots to his ultimate vision for the program, Kermit Davis had a lot to... read more