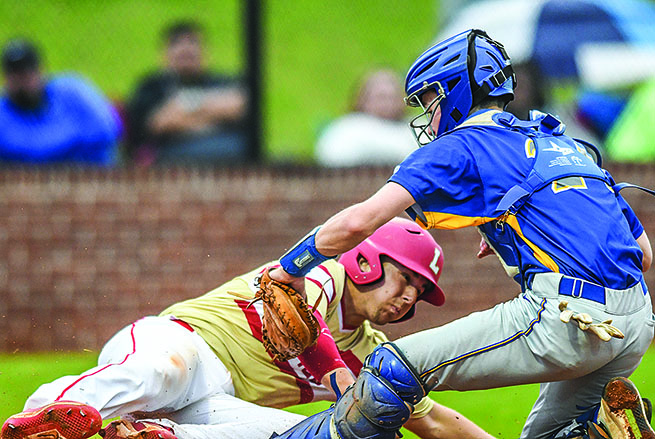 When it comes putting together a string of wins and rounding into a championship contender Lafayette coach John Walker thinks their time is coming. After a long day of baseball on Saturday that time was going to have to wait.

In their final game against each other this season Oxford defeated Lafayette 9-3 at W.V. Brewer Field on Saturday night. It completed a sweep for the Chargers (13-4) over their crosstown rival after defeating the Commodores (6-7) 11-5 on March 15 at Edwin Moak Field.

A lengthy outing from Bo Gatlin and timely hits early on gave Oxford their ninth straight win, capping a 5-0 week for the Chargers.

“These are the games you look back on late in the season and you’re like, ‘man, that game right there was a big stepping stone,’” Oxford coach Chris Baughman said. “These games can kind of springboard you into playoffs later on. They don’t mean a hill of beans in terms of playoffs, seeding but those are the games where you’re like, ‘man, we had some good at-bats that night. Or we made some big plays that night.’”

Gatlin took the mound for Oxford and gave the Chargers six innings of work. The junior gave up three runs off seven hits while walking two and struck out seven Commodore batters. The Chargers held a large lead throughout the game yet Gatlin stayed in, reaching the century mark in pitch count for the first time this season.

“I was trying to stretch (Gatlin) because he hadn’t been stretched all year,” Baughman said. “He’s had three or four really good starts but he’s had to come out at 50, 60, 70 pitches. He hit that 70-pitch mark tonight and that’s as far as he’s ever been. …I wanted to try to get him to the 100-pitch mark and we were able to and he battled through it.”

Oxford took command with two runs in the first and second innings and another in the third. The five-run lead held until the Chargers scored three more runs in the fifth for an 8-1 lead and added the final run in the sixth.

Clark Stovall went 1-for—4 with three RBIs for Oxford. Parker Stinnett was also 1-for-4 at the plate with 2 RBIs and a run scored. John Reese McClure and Drew Bianco were 2-for-4 with two runs scored each.

The nightcap with Oxford completed what was a doubleheader of sorts for Lafayette. The Commodores traveled to Byhalia Saturday morning and came away with a 14-7 win before hosting the Chargers.

Lafayette finally got on the board with a run in the fourth and two more in the bottom of the sixth inning.

“It was a rough day even (at Byhalia),” Walker said. “We came away with a win but it was not pretty. …We’ll get there we just didn’t have a great day today. We’re learning. Our day’s coming. I feel pretty confident with that our days at being really successful playing this game are not far away.”

Westbrook helped himself out at the plate with a 2-for-3 night at the plate and two RBIs. First baseman Austin Wilson also went 2-for-3 and in the leadoff spot shortstop John Tate Roberts went 3-for-3.