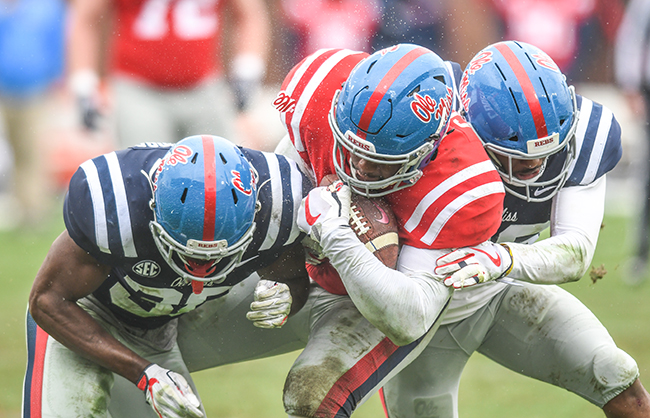 After his first spring game as Ole Miss’ head coach, Matt Luke was quick to point out his youthful players were stepping up in harsh weather conditions.

“A lot of players got better, and that is what spring is for. For young guys that are inexperienced go out there and get a bunch of reps. I thought that happened on both sides of the ball,” Luke said.

The game was played with a running clock and 12-minute quarters with the defense spotted 27 points at the start of the game. But with a lack of depth and a few key injuries, Luke was pleased.

“We had a lot of guys out going into this thing. We had a lot of good reps, good stuff on tape, had a two-minute drill. We got in some tough conditions. You might have to be in a game that way and have to learn from it. Overall, I thought it was good,” Luke said.

With big-time offensive contributors such as A.J. Brown, DaMarkus Lodge and Dawson Knox out for the game or playing limited minutes, Octavious Cooley and Gabe Angel stepped up for the Rebels. The tight ends combined for six receptions for 105 yards.

“Cooley has been a bright spot for this spring. He’s done a lot to get himself going, and he made a lot of plays this spring. He’s a big boy making athletic plays,” Ole Miss offensive coordinator Phil Longo said. “Gabe is one of a number of tight ends we have that are getting a lot more reps in our open packages right now because of those injuries we have at receiver.”

“We’ve had some receivers out for various reasons. So we’ve gone into practices with even a bigger focus on the run game than we’ve initially planned,” Longo said.

Though the Rebel defense gave up a 53-yard touchdown to begin the game, many of the goals set this spring for the defense were fulfilled, defensive coordinator Wesley McGriff said.

“The biggest goals we had were to eliminate explosive plays, particularly in the run game. The second goal was to take the deep ball away,” McGriff said. “I think the guys did a tremendous job of taking ownership and securing their gap, doing their job, and taking responsibility by eliminating big plays in the run game,” McGriff said.