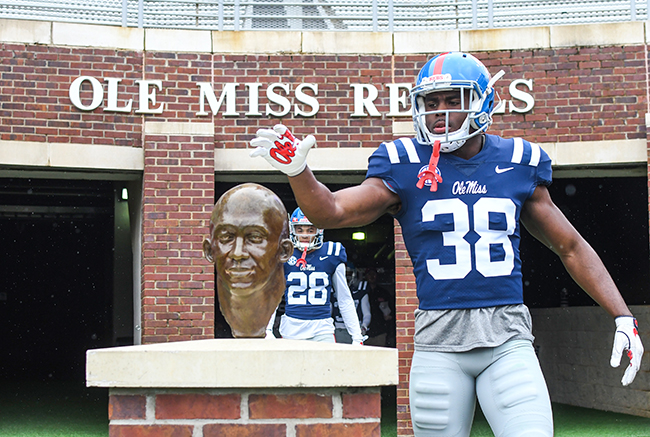 Mississippi defensive back C.J. Moore reaches out to touch a bust of the late late Chucky Mullins before the start of the Grove Bowl at Vaught-Hemingway Stadium in Oxford, Miss. on Saturday, April 7, 2018. Moore was named the recipient of the 2018 Chucky Mullins Courage Award winner earlier today. (Bruce Newman, Oxford Eagle via AP)

C.J. Moore is the recipient of one of Ole Miss football’s most prestigious honors.

Moore was named the Chucky Mullins Courage Award winner Saturday morning in advance of the Grove Bowl. The award, which annually goes to a defensive upperclassman, is in its 29th year in memory of Mullins, the former Ole Miss safety who died from complications from the infamous hit he put on Vanderbilt’s Brad Gaines on Oct. 28, 1989 that left him paralyzed.

Moore will wear Mullins’ No. 38 jersey next season.

A senior defensive back, Moore has played in 37 games in his career, drawing six starts (five at safety, one at cornerback) last season. He finished with a career-high 51 tackles while leading the Rebels with three interceptions. It was his first season back after a torn pectoral muscle caused him to miss the 2016 campaign.