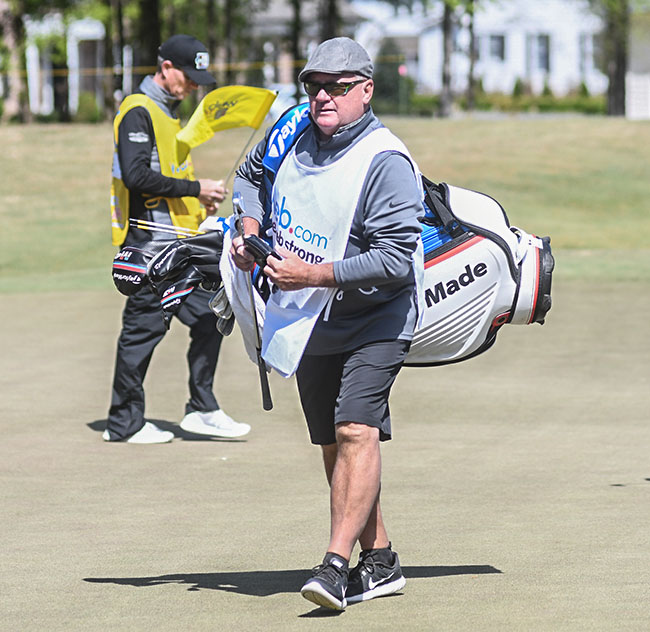 Caddie Steve Shellard caught a ride from Rhode Island to work for Adam Long in the opening round of the North Mississippi Classic at the Country Club of Oxford, in Oxford, Miss. on Thursday, April 19, 2018.

There are plenty of ways to get to your destination.

For Steve Shellard, a caddie for the North Mississippi Classic, the quickest route was not available.

On April 15, flights out of Providence, Rhode Island were canceled, keeping Shellard from completing his journey to Oxford for the Web.com tournament. Essentially stranded, Shellard took a Lyft to the Providence train station with the hope of traveling to Philadelphia and grabbing a red-eye flight to Memphis.

Shellard missed the last train out.

Intending to head back to the airport to re-evaluate, Shellard met Arthur, his second Lyft driver of the night.

The two conversed and Arthur learned of Shellard’s dilemma in trying to get to Oxford by the next day.

“(Arthur) said he’d never really ventured out of New England and had always wanted to road trip to that part of the country,” Shellard recalled. “I jokingly said ‘well, let’s go.'”

Shellard didn’t expect Arthur to accept the offer but the two made an arrangement for Arthur’s services as Lyft does not allow trips of that length. After that, it was off to Oxford.

After ten states, 1,100 miles and 26 hours of driving, Shellard arrived in Oxford just in time to caddie for Adam Long last week.

“He got me in in time for me to take an hour nap before I needed to meet my player for an 18 hole practice round on Tuesday,” Shellard said. “Arthur turned around and headed back home.”

The adventure turned a driver and a fare into friends who will keep in touch. Shellard met Arthur’s family via ‘Facetime’ and a bond has been formed.

Ole Miss’ bats go silent against Georgia in another…