Our dog Lady has a good heart 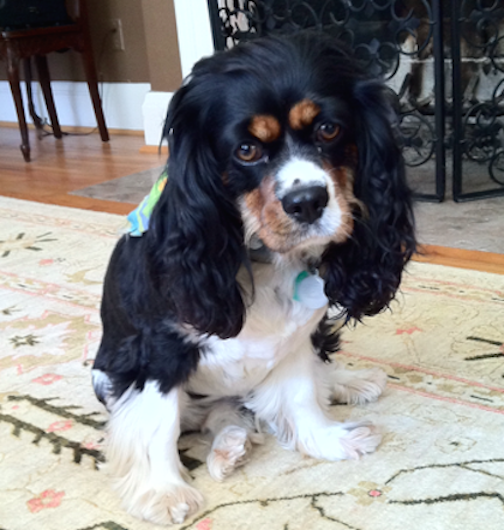 Our dog Lady is a champ.

She was our first family dog, acquired at the urging of our daughter, then in high school. Every girl needs a dog, she said. Besides, an older brother had just become the first to leave home for college, so the timing was right.

Few better ways to fill a void than with a new puppy.

We didn’t know much about dog parenting in those days. We didn’t crate train her, assuming she would rather be free. We didn’t understand how an un-watched puppy will snap expensive shoes, or even chew a leg on a valued heirloom chair.

We learned the hard way.

Lady, now a 10-year-old tricolor Cavalier King Charles Spaniel, was a big girl by breed standards from the beginning, almost twice the size of her littermates.

She was playful, and her size was becoming, even though others persistently asked to our annoyance as she grew and grew, how we liked our Springer Spaniel. (The Springer Spaniel is typically two times the size of its cousin, the Cavalier King Charles Spaniel.)

No, we would explain, she’s just got big bones.

She also had a voracious appetite that might be characterized as an eating disorder but that’s another story.

We bonded with Lady those early years, and she did fill a void in the house, with a role that increased as another child went to college and another. Our daughter’s dog became our dog, in a familiar storyline, and her importance in the family grew.

Tragedy struck, along with other unforeseen circumstances that always seem to keep families on their toes, and trying days had us clutching one another, and our dog Lady.

For almost a year our champ guided early morning walks before sunrise that gave momentum to both tears and hope, the type of therapeutic steps that become a foundation of strength. Regardless of the weather, in cold, or snow, or muggy heat, Lady was always rearing to go the mile or two.

When work dictated a move she instantly made a new place immediately a home.

Lady became a sort of family mascot over the years, a reminder that being loyal and true is a salve for all wounds. Plus, every day is better with a soft and loyal friend at your side.

Lady’s steps have slowed in recent years, no longer up for sprints around the yard or a long, brisk walk. A hind leg is giving out due to arthritis, though she skips along on three like she’s done it her entire life.

Also, her heart is failing.

Lady’s breed has a short lifespan, and congestive heart failure is setting in. The sounds of her coughing and gagging on congestion were distressing at first, but are now a reminder that she’s still with us.

Medicine is helping ease symptoms to the point she’s not bothered. But reality says that she’s got a year or less left.

We won’t let Lady suffer for even one day, but there’s no concern yet. She still happy as ever as if nothing has changed.

It’s just that none of us creatures live forever, and it is apparent Lady’s time is inching closer so it’s on our mind.

Maybe that’s it, however. She is just a dog.

And that’s says everything, as most dog owners know. They are at our side, ably guiding life’s journey, as long as their beating heart allows.

David Magee is the author of a dozen books including The Education of Mr. Mayfield: An Unusual Story of Social Change at Ole Miss.

The Mississippi Legislature vs. public schools