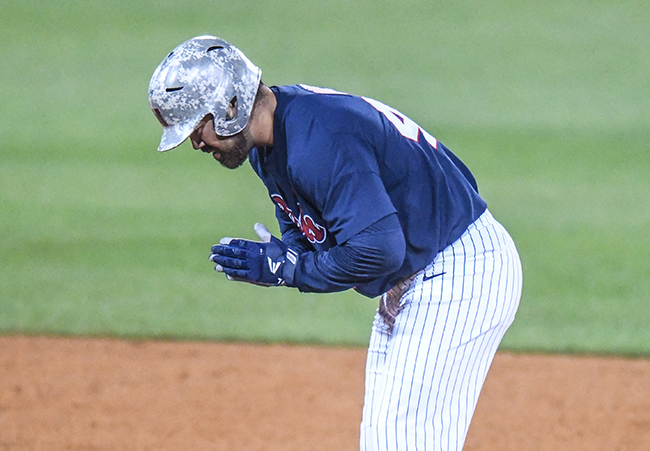 It’s been difficult for Tim Rowe to find his way back into Ole Miss’ lineup this season, but he’s making the most of an unexpected opportunity.

Rowe had his second straight three-hit night in helping No. 6 Ole Miss pull off one of its most decisive wins over LSU with a 14-3 victory in the teams’ series opener Thursday at Oxford-University Stadium. An 11-run sixth inning broke a 3-all tie and put the Rebels (33-10, 11-8 SEC) well on their way to their largest margin of victory over the Tigers (25-18, 9-10) since a 16-3 win in Baton Rouge in 2011 and a half-game lead over Arkansas atop the SEC’s Western Division standings.

Filling in for the injured Ryan Olenek (slight labral tear) in right field for the second straight game, Rowe went 3-for-3 with three doubles before a strikeout in the sixth ended a string of six straight hits for the senior. Rowe hit .254 last season with 28 of his 30 starts coming as the designated hitter, but a pulled hamstring lingered into the start of the season and limited him to just five hits in 28 at-bats coming into this week.

“(Rowe) starts the year with a pulled hamstring and really kind of gets behind some people,” Bianco said. “It’s really because the guys that got in there, guys like (Chase) Cockrell, Ryan, (Tyler) Keenan and others, have swung it so well, it’s tough to get him back into the lineup.”

But after going 3-for-3 in the Governor’s Cup against Mississippi State on Tuesday, Rowe surpassed that season hit total with his final double Thursday — an RBI knock in his first at-bat in the sixth as part of a 45-minute half-inning, the first time Ole Miss scored at least 10 runs in an inning since 2010.

“It’s a little hard (to wait your turn), but you’ve just got to do what you do every day and put in the work on your own time,” Rowe said. “It’s a good thing we have (hitting) coach (Mike) Clement, Hunter Doucet and Collin Brinkley, our managers. They throw to us every day, and it’s just wonderful having them.”

Said Bianco, “We have an injury and he’s able to step in immediately. Don’t know how many hits he’s had in the last two games but a ton. Proud of him.”

Six Ole Miss players had multiple hits as the Rebels finished with 15 against five LSU pitchers. Will Golsan drove in three runs while Cockrell and Nick Fortes each had two RBIs.

Ryan Rolison (6-3) allowed three runs on six hits, struck out five and walked one through the first six innings before returning for the seventh despite the lengthy wait. The left-hander retired the Tigers in order in his last inning of work and has logged seven innings in back-to-back outings and three of his last four. Freshman Max Cioffi allowed two hits in the final two innings.