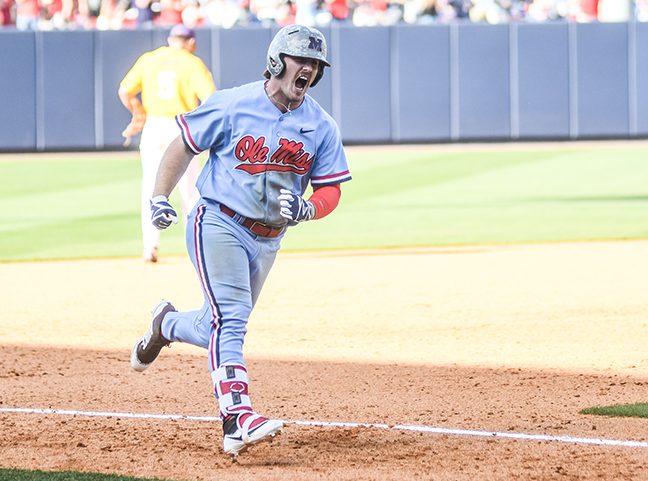 Thomas Dillard’s at-bat in the seventh inning Saturday was something he always envisioned.

With the largest crowd in school history on the edge of its collective seat, Ole Miss’ biggest power threat stepped in against LSU right-hander Caleb Gilbert with a chance to swing the momentum back in the Rebels’ favor in the rubber game of a key SEC Western Division series.

Six pitches later, he did it. Literally.

Dillard delivered a go-ahead three-run home run, and Will Ethridge and Parker Caracci combined for 6 ⅔ innings of one-run relief as No. 6 Ole Miss rallied for a 9-8 win at Oxford-University Stadium to clinch its second straight series win. The victory will either keep them a half-game back of Arkansas in the SEC’s Western Division or put them atop the standings by the end of the day.

“That’s one of the things you dream of as a little kid — 3-2 count, whatever inning it was, two people on base with the chance to put your team ahead. To see that actually happen is just one of those things I don’t think I’ll ever forget.”

Dillard’s blast — his team-leading 10th of the season — gave Ole Miss (34-11, 12-9 SEC) a 9-7 lead that was in jeopardy in the ninth after LSU (26-19, 10-11) put the first two on against Ethridge. Parker Caracci came on and walked two of the first three batters he faced to force in a run but got a strikeout and a flyout to leave the bases loaded and preserve Ole Miss’ 14th comeback win of the season.

Ethridge (2-1) logged the most important innings after LSU got to James McArthur for five runs as part of a sixth-run third that erased a 4-1 lead for Ole Miss built largely on a three-run homer from Tyler Keenan. Freshman Max Cioffi came on first in relief but retired just one of the four batters he faced before giving way to Ethridge, who minimized the damage by allowing just one inherited runner to score in the frame.

Ethridge followed with five scoreless innings to keep Ole Miss close in the longest relief outing of his career. The sophomore right-hander, who had not gone longer than three innings this season, limited the Tigers to four hits with just one of those coming from the fifth inning on before Antoine Duplantis started the ninth with a single.

“I just had to go out there and do my job,” Ethridge said. “We had to put up zeros real fast and try to give our offense the best chance to put up some runs. I just wanted to go out there, make some pitches and get some outs.”

It gave Ole Miss time to chip away at a 7-4 deficit. Tim Rowe started the Rebels’ five-run seventh with an RBI double — his fourth of the weekend — before Grae Kessinger’s RBI single got the Rebels closer. Hal Hughes couldn’t handle Nick Fortes’ grounder to shortstop, putting two on for Dillard.

“We can’t do it without Ethridge,” Ole Miss assistant coach Mike Clement said. “We have to get stops and zeros and have to have a bunch of them, and he did that.”

Dillard, who was hitless in 10 at-bats since a fourth-inning home run Tuesday in Ole Miss’ midweek loss to Mississippi State, fell behind 0-2 against Gilbert (3-4). The former Oxford High standout laid off a pair of high fastballs and eventually worked the count full before blasting a tape-measure shot beyond the right-field terrace for the decisive blow, sending the majority of the 12,152 fans in attendance into a frenzy.

Ole Miss drew 32,075 for the weekend, the second-largest attendance for a series in school history.

“This is not normal. This is a college football atmosphere in a college baseball stadium,” Clement said. “It’s second to none. I know the people in the other dugout today would argue that, but I’ll argue nose to nose with them.”

The Rebels will stay home Wednesday against Arkansas-Pine Bluff (6:30 p.m.) before heading to South Carolina for the weekend.