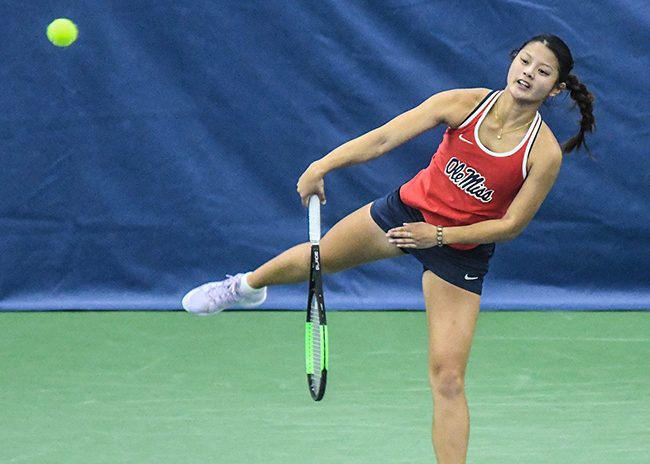 The Ole Miss women’s tennis team earned its 10th straight bid to the NCAA Tournament, and the Rebels will start their quest for a national championship at home.

Ole Miss will host the first and second rounds of the 64-team tournament May 11-12 at the Palmer/Saullom Tennis Center. It’s the third time ever to host for the Rebels, who received the No. 5 overall seed when the tournament bracket was released Tuesday.

“We are extremely excited to host,” Ole Miss coach Mark Beyers said in a statement. “We have two players graduating, and for them to be able to be here for that as well and for us to be able to sleep in our beds and not have to go on the road again is fantastic. We are looking forward to getting a big crowd with graduation and baseball here that weekend and hopefully win two matches to advance.”

Ole Miss will play host to Missouri State, Wichita State and Syracuse with the Rebels facing Missouri State on May 11 at 4 p.m. in their tournament opener. Wichita State and Syracuse will start the weekend with a noon matchup with the winners set to square off at 2 p.m. on May 12 for the right to advance to the Sweet 16 in Winston Salem, North Carolina.

Ole Miss is making its 21st overall NCAA Tournament appearance and is hosting for the first time since 2012. The Rebels are led by SEC Player of the Year Arianne Hartono, who has a 20-2 record in dual matches, while Alexa Bortles, Sabina Machalova Tea Jandric and Anna Vrbenska each earned All-SEC honors.

Ole Miss, which owns the nation’s fifth-longest NCAA streak, will face Duke in its first-round match May 12 at noon CT. Stanford, the No. 4 national seed, will take on New Mexico State with the winners advancing to play each other May 13 at 4 p.m. CT for a spot in the Sweet 16.

“The guys deserve this because they have been working hard the entire season to put ourselves in this position,” Ole Miss coach Toby Hansson said in a statement. “We’re going to go out to Palo Alto and play our best tennis and enjoy it.”