Oxford shut out by Madison Central in Game 1; Grace strikes out 10 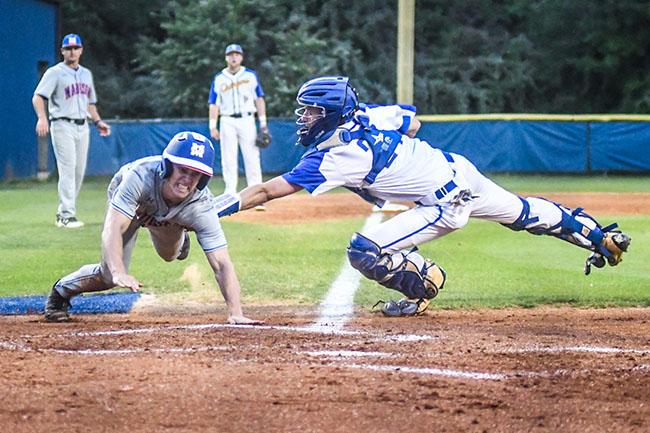 Oxford High catcher Clay Ivy (24) tags out Madison Central's Miles Allen (13), who was trying to score from third following a strikeout pitch in the dirt, during the MHSAA Class 6A playoffs at Edwin Moak Field in Oxford, Miss. on Thursday, May 3, 2018. Madison Central won 4-0 in game 1 of a best-of-three series. (Bruce Newman, Oxford Eagle via AP)

The Jaguars threw their ace on Thursday night, and the senior delivered.

Regi Grace was the key on both sides of the ball for Madison Central (25-5, 8-2), which shut out Oxford 4-0 in the first game of the third round of the MHSAA Class 6A baseball playoffs.

Grace went the distance for the Jaguars, throwing a complete game that allowed just one hit by the Chargers. Along the way, the Mississippi State signee struck out 10.

“(Grace) is as good as advertised,” Oxford coach Chris Baughman said. “He’s one of the best I’ve ever faced, and we knew that going in.”

Grace and Oxford’s Parker Stinnett began the night with a pitchers’ duel as both walked and hit batters to place runners on bases. The Chargers (21-9, 7-2) put two on in the bottom of the first with the opportunity to take the lead behind Stinnett’s flyout to left field.

“We had a chance to push one across. Parker hit a missile on a first-pitch fastball, and if it falls, then it’s a different ballgame,” Baughman said.

The game remained scoreless until the fourth inning when Grace smashed a leadoff double that was followed by a one-run double from Kirkland Trahan. Madison Central followed it up by adding a second run in the frame after an error.

The Jaguars added another run in the fifth off Grace’s groundout to first. Their last run of the night arrived in the sixth inning behind Hunter Blalock’s single.

Bo Gatlin turned in the lone hit of the night for Oxford, leading off with a single in the fifth inning.

Tonight, the Chargers will travel to Madison Central for the second game of the series; now a must-win situation to keep hopes of a return to Pearl and the state championship series alive.

“For eight years now I’ve told my guys in the playoffs that win or lose, it’s a three-game series. You have to flush this one because Game 2 and Game 3 is where you make your money,” Baughman said. “Tomorrow we’ve got to put runs on the board.”

First pitch for tonight’s game will begin at 6 p.m. If the series requires a Game 3, that game is set for 7 p.m. on Saturday at Edwin Moak Field.