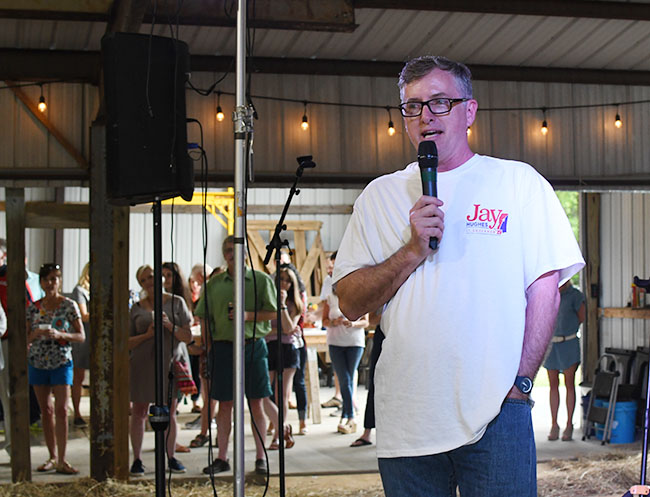 Rep. Jay Hughes speaks at a campaign event in Oxford, Miss. on Thursday, May 3, 2018. Hughes, 54, is the first candidate to announce his candidacy for Lt. Governor of Mississippi for what will be an open seat next year. (Bruce Newman, Oxford Eagle via AP)

Rep. Jay Hughes arrived in Oxford yesterday evening after a series of stops across the state announcing his candidacy for lieutenant governor in 2019.

Hughes and his team arrived on the former alderman’s farmland in Lafayette County in the official “Imagine Wagon” campaign bus, where the candidate was greeted with smiles and handshakes from party attendees.

When Hughes took the stage, he spoke of his tendency to cause a stir in the state legislature.

Hughes was the first person to announce a 2019 campaign for the lieutenant governor spot, and that wasn’t an accident. At least for one day, he said, he wanted to be able to say he was in first place.

As the only Democratic representative for Lafayette County, Hughes often voices his opinion about pivotal issues, such as mental health care, Medicaid and education. Education, in particular, is something Hughes said he is passionate about, as evidenced by his slogan, “It ALL starts with education!”

Hughes said he wants the people of Mississippi to know he’s just like them, not the “typical politician.” Even though he has a tendency to make legislators on both sides of the political aisle mad, he said what matters to him most is the needs of regular Mississippians.

John Morgan, alderman-at-large for the city of Oxford and a friend of Hughes, said Hughes’ tendency to speak out isn’t new – and neither is his appreciation for his roots.

“I can honestly say, he gave Pat Patterson just as much grief as he gives the people in Jackson,” Morgan said. “Jay’s got a great, interesting story. I love where he comes from.”

The child of an oil field worker and a truck driver, Hughes said he recalled drinking powdered milk as a child and suffering through a sprained wrist because the family couldn’t afford the $5 fee for the doctor.

For all the things they did without, Hughes said they were rich in other ways.

“My dad said, ‘All I’ve got to give you is a good name. Don’t mess it up son,’” he said. “I haven’t changed, just my position in life has changed. Why I want to run to be your lieutenant governor – and win – is to make a difference, so the capital will respond to real people and real issues, and not only to campaign contributions or whoever has the highest-paid lobbyist.”