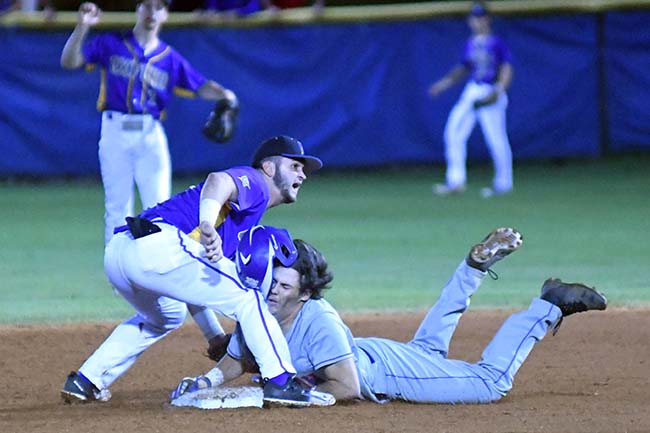 Madison Central’s Kade Dees (2) is safe at second as he slides into the knee of Oxford High shortstop Drew Bianco (1) in MHSAA Class 6A playoffs at Edwin Moak Field in Oxford, Miss. on Saturday, May 5, 2018. Oxford won 7-6 in extra innings to advance.(Bruce Newman, Oxford Eagle via AP)

Oxford’s season lives on another week.

The Chargers erased a four-run deficit and defeated Madison Central 7-6 in eight innings to win Game 3 of their MHSAA Class 6A third-round playoff series at Edwin Moak Field late Saturday.

The Chargers once again find themselves in familiar territory, a series away from playing at Trustmark Park for the fifth straight season. They will play DeSoto Central in this week’s North Half series beginning Thursday at 7 p.m. at DeSoto Central High School.

The Jaguars made a lot of noise, especially with a pair of three-run innings in the second and fourth. Oxford (23-9) refused to let their season end in a game that head coach Chris Baughman said was one of the best he’s been apart of.

“They’ve got a way of finding ways to win when it gets to this time of the year,” Baughman said. “It is what’s been instilled in them by the guys that have graduated before them and that is all they know. They feed it to one another. There was not a better team in the state the last two nights than we were.”

The past two days were also considered a success on and off the diamond due to weather issues.

“There are so many people that contributed the whole night and the whole night (Friday) night,” Baughman said. “From the middle school team and their parents getting the tarp on the field so that we can play today. Just everything that happened in the last 24 to 30 hours has just been what we try to preach.”

Madison Central (25-7) drew first blood with Kirkland Trahan scoring on a wild pitch. That was followed by a two-run blast by Easton Palmer, who finished 3-for-4 at the plate, to make the score 3-0 in the second inning.

The Chargers responded with a RBI single by Drew Bianco to score John Reece McClure in the bottom half of the inning. Clark Stovall would score on a Parker Stinnett double in the third inning to get within one run of the Jaguars.

The Jaguars tacked more runs on the board with another two-run home run, this time by Parker Nelson. Another run later that inning would give the Jaguars a 6-2 advantage in the fourth inning.

The Chargers had a golden opportunity to tie the game down 6-3 in the sixth inning. They capitalized thanks to a three-run triple by Stinnett to force the game to extra innings.

Drew Bianco, who was still nursing a wrist injury and also finished 3-for-4, hit a deep ball to left center field that nearly went out of the park. Instead, it bounced off the wall for a leadoff double in the eighth. Stovall drilled a laser over the shortstop’s head to score Bianco for the walk-off win.

Sophomore Eli Wicker picked up the win after taking over for Hays Roth in the fourth. Wicker struck out seven batters on the night.