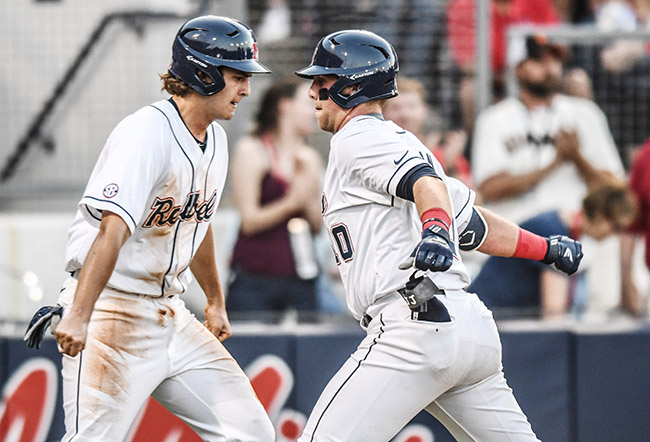 No. 5 Ole Miss ended the regular season Saturday with a 10-8 win over Alabama at Sewell-Thomas Stadium to clinch the series and its first division title since 2014. Ole Miss and Arkansas finished with identical 18-12 league records atop the division standings after Georgia took two of three from the Razorbacks, but the tiebreaker went to Ole Miss with its series win over Arkansas back in March.

The series win also keeps Ole Miss (42-14, 18-12 SEC) in heavy contention for a national seed heading into next week’s SEC Tournament. As the tournament’s No. 2 seed, the Rebels are guaranteed at least two games in Hoover after receiving a bye into the double-elimination portion of the bracket.

Ole Miss will face either Auburn or Kentucky on Wednesday at 1 p.m. A win would likely lock up the Rebels’ first national seed since 2009, though Ole Miss could use two to feel safe. Only one SEC team since 2002 has won 20 league games counting the conference tournament and not been a top 8 seed in the NCAA Tournament (South Carolina in 2012 got a national seed with 19 conference wins but had a game canceled).

Cole Zabowski went 4-for-5 with a home run and a career-high six RBIs for the Rebels, who had to wait out a two-hour lightning delay and multiple threats from the Crimson Tide (27-29, 8-22) before clinching the division crown. Zabowski added a two-run, two-out single in the Rebels’ three-run eighth that provided the insurance Ole Miss needed.

Parker Caracci came on with one on and one out in the bottom of the eighth and gave up RBI doubles to Cobie Vance and Chandler Avant that got the Crimson Tide within two runs, but Caracci got a flyout to strand two more runners in scoring position. A hit batter and catcher’s interference put two on with one out in the ninth for Alabama, but Caracci got back-to-back strikeouts to finish the five-out save.

Pitching in and out of jams was a theme for the Rebels’ bullpen, which logged the final seven innings after the delay cut James McArthur’s outing short. Will Ethridge gave up four runs on nine hits in 3 ⅓ innings before Will Stokes, Jordan Fowler, Greer Holston and Caracci went the rest of the way.

Alabama plated a pair of runs in the third and the sixth to cut the deficit to one after Nick Fortes’ RBI single, but Stokes came on with one out in the sixth and induced a 6-4-3 double play to strand the tying run at second. Fowler put the tying run on in the seventh with a leadoff walk, but Holston got a double play and a flyout to defuse the inning.

Ole Miss finished with 12 hits against eight Alabama pitchers. Thomas Dillard had an RBI double and scored three times while Tyler Keenan drove in a run.

This story will be updated.