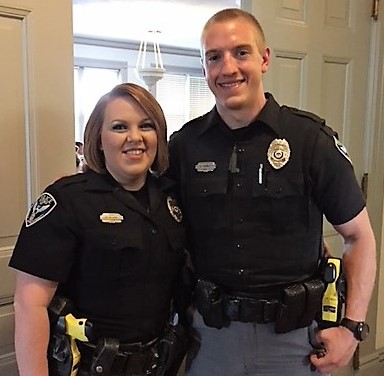 Police officers serve the community by keeping criminals off the streets, solving crimes and patrolling neighbors to protect personal property from would-be burglars.

Often, they are called on to save a life.

Such was the case on April 5, when Oxford police officers Kandi Beavers and Colby Terrell responded to a call that a woman had cut her wrist in a room at a local hotel. They were the first on the scene, arriving before paramedics.

After entering the room, the officers saw the woman lying unconscious on the floor with a large amount of blood trailing from the bathroom to the bedroom.

“The first thought that came to my mind was that she had bled out due to the amount of blood in the room,” Terrell said. “But once we realized she had a pulse and that she had cut an artery in her wrist Officer Beavers and myself knew that she did not need to lose any more blood and took action.”

Beavers applied pressure to the wound until Terrell could apply a tourniquet around the arm.

EMS arrived shortly after and transported the women to Baptist Memorial Hospital-North Mississippi where staff determined the woman had cut a major artery, tendons and muscles. She was listed in critical but stable condition and flown via medical helicopter to the Regional Medical Center in Memphis.

“Medical personnel said the due to the victim cutting the artery and the amount of blood she lost, that if not for the officer’s quick actions in assessing and applying the tourniquet, the young woman would not have survived,” said OPD Chief Joey East.

The two officers were recognized by Mayor Robyn Tannehill and the Oxford Board of Aldermen Tuesday for their quick-thinking and professional response.

“We are so proud of you both,” Tannehill said to the officers.

OPD officers are all required to take a CPR class along with a tourniquet training class.

“I have encountered a few other unresponsive individuals in which some other officers and myself attempted CPR to bring someone back, but I never encountered someone who had a major artery cut, nor have I had to place a tourniquet on anyone other than for training purposes,” Terrell said.

“If it wasn’t for all the hard work that all our administration does for us we would have never been able to complete the appropriate training needed in a situation like this.”