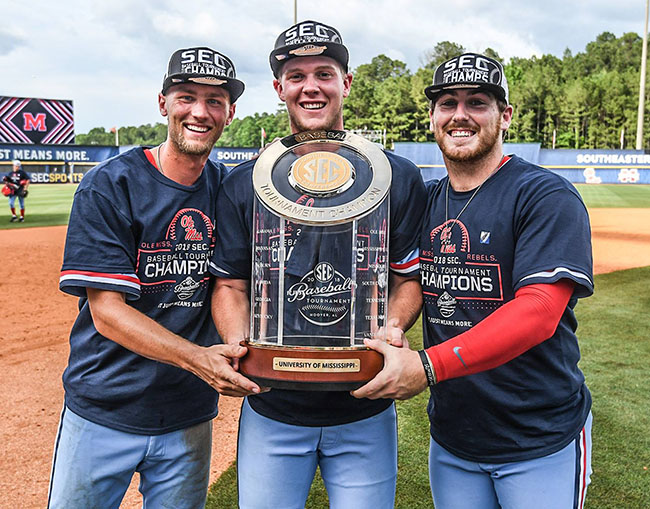 Ole Miss baseball players, from left, Grae Kessinger, Houston Roth, and Thomas Dillard hold the SEC Tournament championship trophy following the win over LSU at the Hoover Met in Hoover, Ala. on Sunday, May 27, 2018.

Ole Miss had the No. 1 recruiting class in the nation last season. Among them were Thomas Dillard, Grae Kessinger and Houston Roth. Former players at Oxford High School who committed to play for the Rebels seven minutes across town.

The expectations were high coming into the 2017 season but the Rebels fell short, missing out on the NCAA Tournament. The Charger trio took their lumps along with the other freshman but used it as a learning experience.

It aided in Ole Miss winning a program-best 46 wins, their third SEC Tournament Championship and earning their highest National Seed bid. It also means three Oxford natives will play for a berth to the College World Series in their own backyard.

“I’ve watched as a fan a lot of big games here and to be able to be out there and be a part (of the regionals) now is awesome,” Kessinger said. “I can’t wait for the opportunity. It will be a moment I’ll never forget.”

Ole Miss baseball is in Kessinger’s blood. From his dad, uncle and grandfather. For Dillard it is a different feeling. Dillard moved to Oxford his junior season, helping the Chargers win the 2016 state championship. He committed to Ole Miss along with Kessinger and Roth with the expectations of bringing a Regional and Super Regional home

“It means a lot to us,” Dillard said. “Me and Grae have been playing together since we’re 12 years old. …obviously Grae has a little more history with his family but we’ve always dreamed about it.”

Roth came in and took up a bullpen role which moved to a midweek starter role this season. As the season moved on Roth ended up back into the Rebels’ bullpen to add more depth. Roth went undefeated this season and picked up his fifth win on Sunday in arguably his biggest start of the year in the Rebels’ 9-1 win over LSU to win the SEC tournament title.

“It’s real neat to see in the SEC tournament championship game Houston starting a game. Grae leading off playing short(stop) and you got Thomas batting fourth playing left field,” Ole Miss coach Mike Bianco said. “They’ve been a huge part of this for two years. You don’t come here unless, especially players of that talent, unless you expect to have success. To be able to be home for the postseason is pretty neat.”

Roth and Kessinger were a part of Oxford’s back-to-back state championships and helped the Chargers become a dominant baseball program in North Mississippi over recent years. Oxford coach Chris Baughman coached them at Edwin Moak Field but is now being able to enjoy his former players success from the stands. He went over to Hoover last Friday and stayed through the weekend to see them win the title.

“It was a great atmosphere. Great crowd,” Baughman said. “It was a neat experience to see those three on the field at the same time on Sunday. …it’s kind of hard to put into words. I know how proud their parents are and how much work they’ve put in. Just like any college player. To have three on the field where some of the best to wear a Charger uniform it was a real neat experience.”