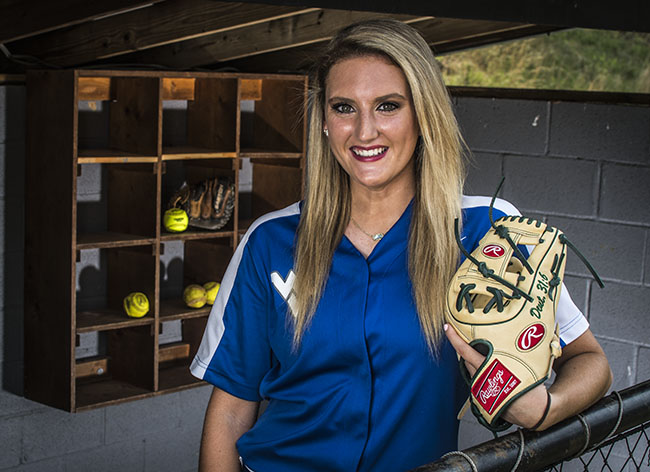 Last season Anna Mills Avant was too focused on numbers. She was too concerned about her production on the mound and in the batter’s box.

This season she took a different approach and everything came easier to her. The difference was in one simple decision and it helped her become the 2018 EAGLE Player of the Year.

“She had more fun,” Water Valley coach Allison McCain said. “There was a lot more fun on the field for her and for everybody. They came out wanting to play instead of just being focused on ‘where is my batting average?’ I didn’t hear that question everyday.

The Blue Devils’ junior enjoyed this year more than previous year’s but it did not mean the work during the offseason was less intense. Avant worked with her travel team coach, Tony Stafford, a couple times a week.

The extra workouts and practices paid off. Avant led the team with a .448 batting average and batted in 28 runs and scored 29 runs herself. She also had 12 extra base hits and a team-best six home runs.

“I really struggled with my hitting last year and that was something that I hit really hard in the offseason,” Avant said. “All Summer, all Fall. Throughout the Winter I was constantly working on my hitting and I think that improved a lot from last year.”

Avant and the rest of the Blue Devils were also adjusting to a new coaching staff. McCain was hired in the summer of 2016 and just completed her second season at Water Valley. Last year was a season of growing pains for both coach and players. This year everyone knew what to expect from each other and the results showed it on the field.

“It was hard coming in having a new coaching staff but (McCain) really made us feel like family when she came in,” Avant said. “She worked hard on us.”

Avant was also part of the Blue Devils’ pitching staff. In the circle she worked 46 1/3 innings, earning a 4-6 record. She struck out 34 batters and had an earned run average of 4.08 to lead the team.

“When (Avant) pitched they were right there behind her,” McCain said. “She very much led by action.”

There is one more season with Water Valley remaining for Avant but she has committed to play for Southeastern Louisiana after her high school career is complete. She will sign with the Lions in November.

Joining Avant on the 2018 EAGLE All-Area team are teammates Hannah Higdon and Sidney Kimzey. The two seniors were instrumental in helping turn the Blue Devils’ back into the right direction during their time at Water Valley.

Higdon was the only other Blue Devil to hit over .400, finishing behind Avant with a .423 average and 17 RBIs. Higdon also picked up four extra base hits and scored 20 runs and only struck out twice all season in 83 plate appearances.

“(Higdon) was a very vocal leader,” McCain said. “She wanted to push them the best that she could. …just like Anna Mills, if she was hitting the rest of the team was hitting.”

Avant and Higdon have been on the radar for opposing teams but Kimzey was a player who lived under it, until her final season as a Blue Devil.

Kimzey was the third best batter for McCain, hitting .343 and tying Higdon with 17 RBIs. She also recorded two doubles and scored 23 runs.

“This year I think (Kimzey) played in the moment,” McCain said. “(I think) she said ‘this is my senior year, why not leave it all out here?’ That was her mentality. …it made a difference.”

Making it onto the All-Area team for Lafayette, coming off their first season in Class 5A, is Chloe Russell, Cylie Robertson and Mariah Holland.

Since the eighth grade Robertson has been a key player on the field for the Commodores. In her final season with Lafayette, Robertson hit .352 at the plate for 11 RBIs, recording two doubles and scoring a team-high 32 runs, tying with freshman Rayne Rippee.

“This year (Robertson) learned a lot about standing still and hitting, being a dual threat,” Lafayette coach Katie Jenkins said. “Just her consistency with speed in the outfield and doing her job. She’s always been a threat (with her speed). When Mariah is still playing basketball (Robertson) is who we move to center field.

Russell has been that utility player for Jenkins. Wherever needed Russell would play. She was also voted the Commodores’ most valuable player by her teammates.

“Coming in of course we knew we’d use (Russell) for pitching, but we knew she’d played second. So, we thought that was what was going to happen then we had a catching change,” Jenkins said. “She even played some third. It really didn’t matter. You could ask Chloe if she was going to play and she’d say ‘mhmm.’”

The reigning EAGLE girls basketball player of the year also started to figure things out on the softball field her junior year. Holland hit for .464 and 27 RBIs, finishing second behind Rusell in that category. Holland has six extra base hits and scored 25 runs.

It was not the best of seasons for the Chargers, playing their season in the top of Mississippi High School softball in Class 6A, yet Oxford had bright spots.

Madison Crosby, Amber Pettis and Brittni Beard were some of those bright spots and find themselves on the All-Area team.

Crosby led the team with a .429 average and with 18 RBIs. She had one home run and six total extra base hits, scoring 19 runs and had an on base percentage of .544.

Pettis was right behind Crosby with 16 RBIs, hitting .316 at the plate for seven doubles. She also scored 16 runs.

“Madison is just an extremely hard worker,” Oxford coach Tabitha Beard said. “She’s very intense. I knew early what I was getting with Madison and the work ethic. It’s something that can’t be beat.

(Pettis) is that kid where your heart just bursts with pride as a coach when you look at her and where she’s come. She’s another one that’s truly said ‘wherever you need me’. One game she was in left (field). Another game she was at third, but she always did it with a smile. Then one game she’s pitching.”

It was an interesting year for Brittni. About a week after Spring Break she was involved in a car accident, bruising her ribs. Beard continued to play and managed to keep her batting average over .400 (.410) and recording 10 RBIs and scored four runs. She also had 10 doubles.

“This year has probably been one of the most trying years of her life,” Beard said of her daughter. “She continued to fight (after the wreck). She really just stepped up for us when we needed it. It was a hole to fill on the mound when we came here.”