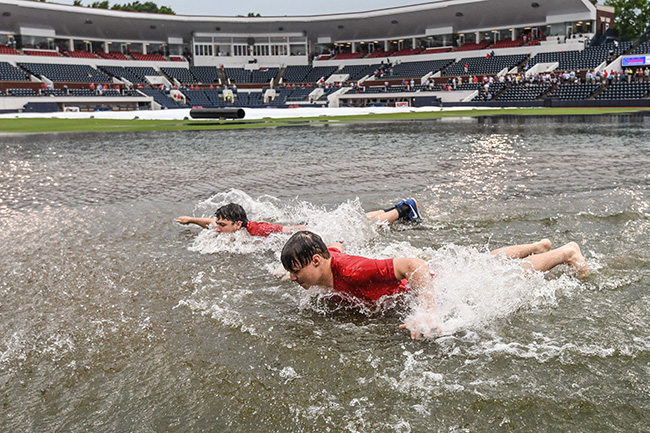 Jack Burkes, foreground, and Cole Catalano swim in the water in the outfield following heavy rainfall at Oxford-University Stadium before the start of the Missouri State vs. Tennessee Tech game for the NCAA Oxford Regional, in Oxford, Miss. on Friday, June 1, 2018. (Bruce Newman, Oxford Eagle via AP)

The Oxford Regional will start a day later than expected.

Friday’s games have been postponed because of inclement weather. No. 2 seed Tennessee Tech and No. 3 Missouri State were scheduled to open the regional before Ole Miss and No. 4 seed Saint Louis played the nightcap at Oxford-University Stadium, but heavy rain in the area pushed the double-elimination tournament back a day.

The outfield as well as both bullpens and dugouts were flooded by late Friday afternoon.

Tennessee Tech and Missouri State will play at noon Saturday before Ole Miss and Saint Louis square off at 6 p.m. Three games will be played Sunday starting with the losers’ bracket game at noon. Saturday’s winners will meet at 4 p.m. with an elimination game set for 8 p.m.

The championship game will be played Monday at noon. An if-necessary game would be played at 6 p.m.

The Oxford Regional is paired with the Austin Regional (Texas, Texas A&M, Indiana, Texas Southern) with those winners set to meet in a super regional.