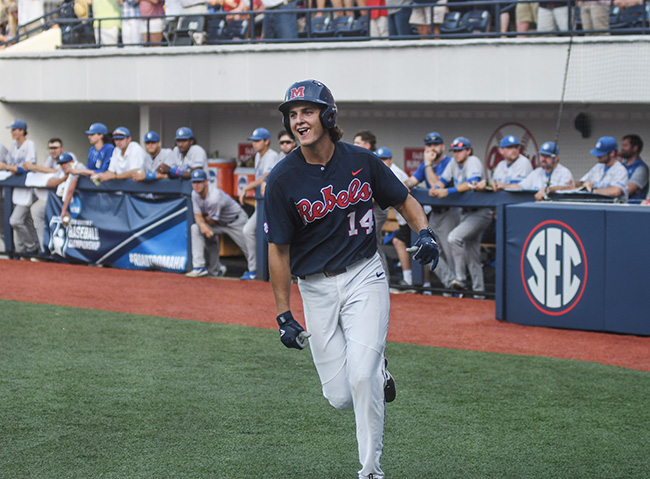 Ole Miss and Tennessee Tech will meet in the winners’ bracket of the Oxford Regional today at Oxford-University Stadium. First pitch is set for 4:45 p.m.

Check back here for updates throughout the game. Ole Miss will be the visiting team.

Bottom 9th: Tennessee Tech loads the bases with one out after two walks and a hit batter. Greer Holston comes on and walks a run in before giving up a two-out, two-run single to Collin Harris to further cut into Ole Miss’ lead. But Houston Roth comes on and strikes out Alex Junior to close out Ole Miss’ 9-8 win.

Ole Miss advances to the Oxford Regional final. The Rebels, who have tied the program record for single-season wins (48), will face the winner of tonight’s elimination game between Tennessee Tech and Missouri State for the championship Monday at noon.

Top 9th: Provey walks Dillard with one out in the inning and is replaced by right-hander Tyler Sylvester, the Golden Eagles’ third pitcher of the game.

Sylvester walks his first batter before Golsan dumps a single into center scoring Dillard to increase Ole Miss’ lead. Golsan is 3-for-5 with three RBIs. Sylvester plunks Keenan and fans Cockrell for the second out before walking in a run. Ball 4gets away from Kaleiwahea, allowing Golsan to scamper home with another run. 9-5 Ole Miss.

Bottom 8th: Caracci works a 1-2-3 inning with some help from Golsan in center. Golsan makes a shoestring grab on Putzig’s liner to end the frame.

Top 8th: Provey retires the first two batters and strikes out pinch-hitter Tim Rowe, but Rowe reaches after the ball gets to the backstop. Kessinger follows with a double into the left-field corner, and pinch-runner Anthony Servideo scores from first to put Ole Miss back in front. 6-5 Ole Miss.

Bottom 7th: Ethridge walks Strohschein to start the inning before giving up a single to Chambers, and his day is done. Parker Caracci is coming on for Ole Miss with two on and nobody out.

Caracci gets a strikeout and a flyout before walking Osborne to load the bases. But Kaleiwahea rolls Caracci’s first offering to Adams at second and gets out of the jam.

Top 7th: Provey retires the Rebels in order on a popup and two flyouts.

Bottom 6th: Osborne sends one into the right-field bullpen for his second home run of the game. Ethridge gives up a one-out single and hits a batter to put two on but gets a groundout and a flyout to keep it a tie game. 5-5.

Top 6th: Adams and Kessinger draw back-to-back walks. Adams steals third before Olenek brings him home with a sacrifice fly, but Provey gets Fortes to fly out to avoid more trouble. 5-4 Ole Miss.

Bottom 5th: Feigl strikes out the first two batters, but three straight singles — the latter an RBI knock from Putzig — cut into Ole Miss’ lead. That brings up Tennessee Tech’s home run leader in Strohschein, who ties it with a two-strike single to left. 4-4.

Another single loads the bases and ends the day for Feigl, who had his shortest outing in his last four starts. Will Ethridge comes on and gets John Ham to ground into a fielder’s choice on the first pitch.

Top 5th: Ryan Olenek and Fortes start the inning with a single and double, respectively, before Thomas Dillard follows with a sacrifice fly to put Ole Miss back on top. Golsan lines one back off Evey’s glove, and the ball gets far enough away to score Fortes. 4-2 Ole Miss.

Evey’s day is done after a Tyler Keenan double. Right-hander Colton Provey is coming on with runners at the corners and two outs. Golsan is picked off third to end Ole Miss’ half of the inning.

Bottom 4th: Feigl turns in his third clean inning with another strikeout. He’s got six through four innings.

Top 4th: A two-out single from Jacob Adams but nothing else for Ole Miss.

Trevor Putzig hits one back up the middle that gets a piece of Feigl’s foot. Jacob Adams can’t field the ricochete. Feigl stays in the game and gets Kevin Strohschein swinging to end the inning.

Top 3rd: Fortes draws his second walk to start the frame but is thrown out trying to steal. Cole Zabowski is hit by a pitch with two outs, but Will Golsan grounds into a fielder’s choice to end the Rebels’ half of the inning.

Top 2nd: A much more efficient inning for Evey, who sits the Rebels down in order on just seven pitches.

Top 1st: Grae Kessinger sends Marcus Evey’s first pitch to the gap in right-center for a double. Nick Fortes and Thomas Dillard draw one-out walks. Kessinger sprints home on a throw to second to give Ole Miss an early lead.

Will Golsan follows with a two-out RBI single to left after Tennessee Tech catcher Brennon Kaleiwahea can’t hold on to the throw while trying to tag Fortes. Marcus Evey plunks Tyler Keenan to load the bases before striking out Chase Cockrell. 2-0 Ole Miss.