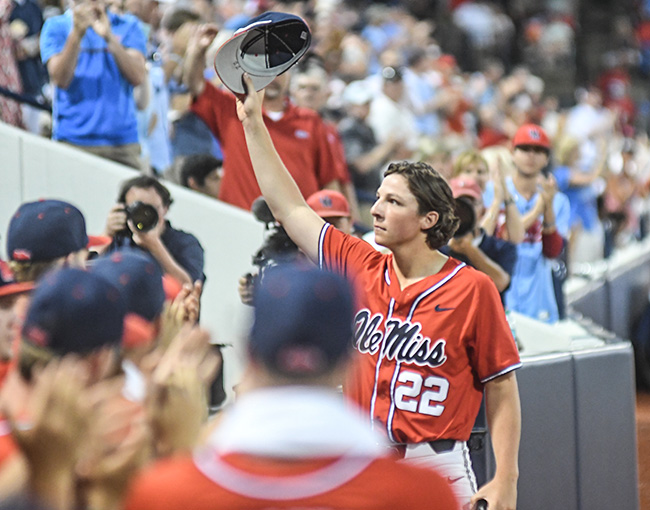 Mississippi pitcher Ryan Rolison (22) tips his cap to the crowd after it was announced that he had been drafted by the Colorado Rockies in the first round of the Major League Baseball draft, during the game against Tennessee Tech in the NCAA Oxford Regional championship game, at Oxford-University Stadium in Oxford, Miss. on Monday, June 4, 2018. Tennessee Tech won 15-5. (Bruce Newman, Oxford Eagle via AP)

Ole Miss’ Ryan Rolison was taken with the first round of the Major League Baseball First-Year Player Draft on Monday. The sophomore left-hander went to the Colorado Rockies with the 22nd overall pick.

Rolison is Ole Miss’ fourth first-rounder in the last two decades (including supplemental picks) and the first since Drew Pomeranz went fifth overall to the Cleveland Indians in 2010. The slot value for the pick is $2.91 million, according to MLB.com.

Rolison found out he had been selected during Ole Miss’ 3-2 loss to Tennessee Tech in the Oxford Regional final. His selection was announced over the public-address system at Oxford-University Stadium before the Rebels’ ace stepped out of the dugout to acknowledge the home fans giving him a standing ovation.

Baseball is the only major collegiate sport where the draft and postseason games happen simultaneously.

“It’s a shame that we can’t figure it out — we as in college baseball and Major League Baseball — to where it doesn’t happen like this and to where it can be celebrated more,” Ole Miss coach Mike Bianco said. “It really it a shame, but I’m very proud of him. Obviously very deserving.”

Rolison, a draft-eligible sophomore because he’s 21 years old, began the season amid some buzz that he could sneak into the top 10 picks. Rolison’s earned run average ballooned to 4.13 after he gave up eight earned runs on 10 hits against South Carolina on May 4 as his command has eluded him at times, but with a repertoire that includes a low-90s fastball and a curveball that some analysts believe may be the best in the draft, Rolison was still the fourth college arm selected behind Auburn’s Casey Mize, the No. 1 overall pick, Stetson’s Logan Gilbert (14th overall to the Seattle Mariners) and Florida’s Brady Singer (18th to the Kansas City Royals).

After going 6-3 with a 3.06 ERA as a freshman, Rolison has put together one of the best stretches of his brief career to lower his ERA to 3.70. Rolison has pitched into the seventh in each of his last four starts without yielding more than two earned runs in any of them.

Rolison, who’s struck out 120 in 97 ⅓ innings this season, has allowed just six earned runs in his last 27 ⅔ innings. He’s holding opponents to a .235 average.

Ole Miss is in jeopardy of losing its highest-rated signees after Joe Gray and Gunnar Hoglund also came off the board on the draft’s first day.

Hoglund, a right-hander from Fivay (Florida) High, was taken by the Pittsburgh Pirates with the 36th overall pick while the Milwaukee Brewers took Gray, an outfielder from Hattiesburg High, in the second round with the 60th pick.

Most of the draft’s top prep prospects request from teams a certain amount that it will take for them to skip out on college and sign. With Hoglund and Gray being taken that high, it likely means their teams are willing to meet that asking price since teams lose that slot value from their draft pool if a player doesn’t sign.