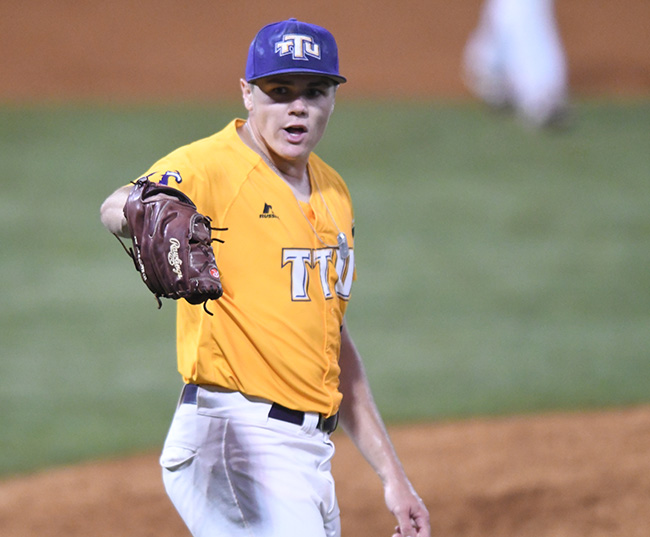 After falling short against Ole Miss and landing in the loser’s bracket, Tennessee Tech had less than an hour to forget about their 9-8 loss and find a way to stay alive in the Oxford Regional.

That way was Alex Hursey, who pitched his second complete game of the season and helped the Golden Eagles defeat Missouri State 2-1 late Sunday night at Oxford-University Stadium. The game was completed in less than two and a half hours.

The win sends Tennessee Tech to the regional final and sets up a rematch against the Rebels on Monday at Noon CT. The Golden Eagles will need to defeat Ole Miss twice to advance to the Super Regional round while the Rebels need to only win once.

Hursey gave up one run off three hits, striking out five and issued only one walk in nine innings of work. Tennessee Tech (50-10) had Ethan Roberts up in the bullpen but was never used.

“Our guys fought and (Hursey) pitched a whale of a game,” Tennessee Tech coach Matt Bragga said. “It was fun to watch. I think that was the fasted game we’ve played in this year and it was at a time it was much-needed to be a fast game after a long day.”

Missouri State (40-17) defeated Saint Louis earlier in the day with a walk-off win to stay alive in the regional and the right to play Tennessee Tech in their second elimination game of the day.

Hunter Steinmetz hit a solo home run in the bottom of the sixth inning, providing the Bears their lone run of the game.

After giving up the two early runs, Bears’ starter Logan Wiley kept the potent Tennessee Tech offense off the board in his final 4 1/3 innings of work. Connor Sechler worked the final 1 2/3 innings of scoreless relief.

“Not really the score I was expecting playing Tennessee Tech. Great offensive club,” Missouri State coach Keith Guttin said. “Credit to (Wiley). He did a terrific job and so did (Hursey).”