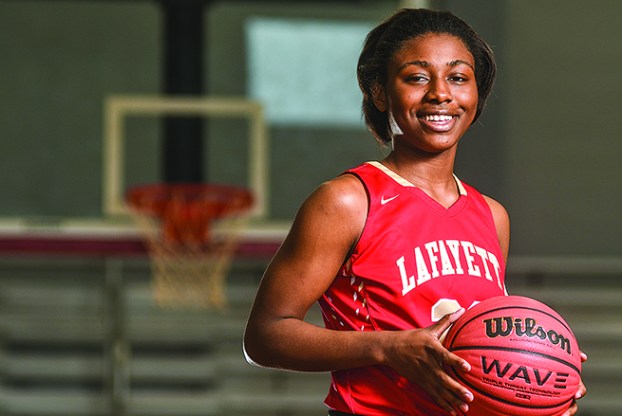 Azariah Buford, above, is one of four returning players who helped lead Lafayette in scoring a season ago. Buford is also fully healthy after a season plagued with injuries. (Bruce Newman)

Lafayette girl’s basketball back at full strength once again

For the first time in months Lafayette is whole again. That could spell bad news for the rest of Class 5A.

After falling short in March against eventual 5A champion Hattiesburg in the state semifinals, it has all been about getting better.

Last weekend, the Commodores closed the book on their summer following a camp at Southeastern Louisiana with a 4-1 record against some of Louisiana’s top teams.
Those wins put a bow on what was a productive summer.

“We’re nowhere where I want to be and that’s a good thing,” Lafayette coach Shayne Linzy said. “I say that because if we were exactly where I want to be for the season then there’s way too much time between now and November, December and January, February, March that you can get content. That’s why I don’t put in all of our offense, all of our defense. I just do the little things that I want to concentrate on because I want the girls, when they come to practice, I want them to be working toward something always. With that said I love where we are. We’re right where I want to be at this point and time.”

The biggest key for Linzy was having his entire team available for summer workouts. He worked with volleyball and softball schedules but for the most part when the gym was open Linzy had his entire team working out.

One player in particular, Azariah Buford, is back at 100 percent following a season plagued with injuries. Buford is healthy once again after suffering a leg injury in the middle portion of the season and then being involved in a tragic car wreck in February.

Buford gutted out the final weeks of the season after missing the 2-5A tournament in Saltillo but was never at her best. Since March the rising junior has gotten herself back to the player Lafayette needs her to be.

“Azariah has looked great this summer,” Linzy said. “I’ve talked with her several times over the last few weeks. Just a ‘hey, how do you feel?’ and she continues to give me a thumbs up. She’s the type of kid that she probably wouldn’t say if it was hurting anyway because she wants to be on the floor. That’s a really great thing I learned this summer. These girls are extreme competitors.”

Linzy is not only getting Buford back at full strength but he is returning a large chunk of his offense. The top-four scorers from last season will be back on the court in a Commodore come November.

After this season Linzy will lose Burgess and Holland due to graduation. Buford will also be in her final year, meaning this summer has been about getting the younger players a lot of opportunities.

Sixteen years ago, Ronnie Hamilton had a decision to make. Hamilton parlayed his experience and production as a four-year letterwinner... read more