What will the talking points be for Ole Miss at SEC Media Days? 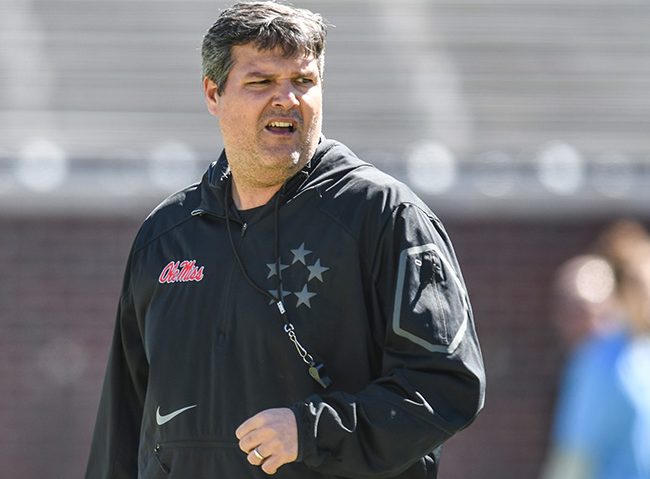 The unofficial start to the SEC’s college football season is back with the league’s annual media days, which start today in a new home at the College Football Hall of Fame in Atlanta.

Ole Miss coach Matt Luke and the Rebels’ player representatives will take their turn in front of the cameras and microphones Tuesday. Here are some topics that are sure to be talking points then.

Ole Miss has made its appearance at the annual kickoff event the last two years with an NCAA investigation hovering over the program, which brought plenty of questions of its own.

Then Hugh Freeze forcibly resigned just days after making his final media days appearance last summer amid a well-documented escort scandal, forcing Luke into an interim role and creating even more speculation about the future of the program.

All of that is gone.

Yes, there’s still an appeals process that has to be finalized while the Rebel Rags lawsuit still has to make its way through the courts, but even if Ole Miss loses its appeal, the Rebels at least know what the worst-case scenario is after the NCAA’s Committee on Infractions issued final penalties back in December. Those include another bowl ban for this season.

Luke and his players are sure to field more questions about the appeal and the finality of the investigation from those who’ve yet to have a chance to ask, but they’ll be different kinds of inquiries as the Rebels have moved out from under the cloud of uncertainty and into a new era under Luke, who had the interim tag removed after last season.

Ole Miss isn’t taking A.J. Brown or Greg Little to media days — a missed opportunity for a program that could use some positive headlines — but there will be plenty asked about two players in line to be some of the highest draft picks in program history.

Brown and Little, both of whom will be juniors this fall, are widely regarded as the top draft-eligible players at their respective positions that are likely to be top-10 picks in next year’s NFL Draft. Sports Illustrated recently took an early guess at the first 10 players to be drafted in 2019 and had Little going No. 3 overall to the Arizona Cardinals while ESPN draft analyst Mel Kiper Jr. has Little and Brown among his top 10 prospects for next year.

Ole Miss hasn’t had a player drafted in the top 10 since Eli Manning, who was famously traded from the San Diego Chargers to the New York Giants, went No. 1 overall in 2004.

It makes sense that Little, a former five-star recruit, is likely to come off the board first given his increased value as a left tackle, but Brown has proven to be one of the nation’s biggest matchup nightmares out wide. The 6-foot-1, 225-pound Brown led the SEC in receiving yards and touchdowns last season and holds the school record for single-game receiving yards.

Shea Patterson made the rounds at media days last year as the young quarterback emerging as the face of Ole Miss’ program, but Patterson is now at Michigan after transferring once word of the NCAA penalties came down.

A relative unknown before filling in for the injured Patterson the final five games of last season, Ta’amu looked like a veteran running Phil Longo’s offense in his first season with the Rebels in keeping the SEC’s top passing offense humming. He completed 66.5 percent of his passes for 1,682 yards and accounted for 15 touchdowns while helping Ole Miss to a 3-2 record down the stretch, including a road win at Kentucky and an upset of rival Mississippi State.

Ta’amu’s emergence not only has him among the SEC’s best quarterbacks entering his senior season but also the Rebels’ undisputed leader at the most valuable position on the field.

A step on defense?

Despite ranking in the top 35 nationally in yards and points, Ole Miss lost as many games as it won last season largely because of a defense that continued to flounder.

Will the Rebels make any serious improvement on that side of the ball under second-year coordinator Wesley McGriff this fall?

If so, they’ll have to do it without leading tackler DeMarquis Gates and draftees Marquis Haynes and Breeland Speaks, not good news for a defense that was already short on proven playmakers. Haynes and Speaks were the only players with more than four sacks last season while consistency at linebacker continues to be hard to come by.

Senior Detric Bing-Dukes is back at the top of depth chart at middle linebacker after a strong spring while safety Zedrick Woods is back for his fourth season as a starter. Familiarity with the system will help, but the Rebels need other upperclassmen and youngsters alike to take serious steps forward in their development if they want to improve a unit that finished last season 109th or worse in total defense, rush defense and scoring defense.

Ole Miss coach Mike Bianco stepping out of his…