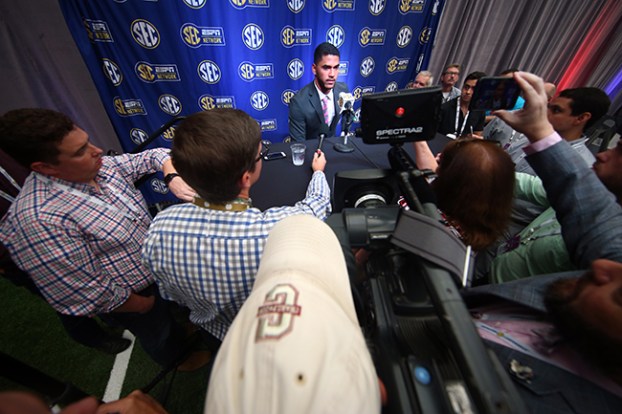 ATLANTA — Shea Patterson stepped on the podium, sat down behind the microphone and fielded nearly 20 consecutive minutes of questions inside the main ballroom at the Wynfrey Hotel in Hoover, most of them centered on emerging as the face of Ole Miss’ program as a rising sophomore quarterback that had the look of a star player that could make this SEC Media Days appearance a regular occurrence.

That was last summer when Jordan Ta’amu was an insurance policy. A lot has changed in a year.

Patterson is now competing for the starting job at Michigan, but Ole Miss isn’t searching for its next starter behind center. Ta’amu locked that up when he took over for the injured Patterson midway through last season and set the SEC ablaze, going from a lightly recruited afterthought to arguably the most important and recognizable player on the Rebels’ roster.

So it was Ta’amu who took his turn representing Ole Miss at the conference’s annual kickoff event this year at the College Football Hall of Fame on Tuesday. Surrounded by reporters in the corner of the room, Ta’amu reflected on when he felt that happened — a 38-37 loss to Arkansas in which Ta’amu accounted for 444 yards and two touchdowns in his first start in place of Patterson, who suffered a season-ending knee injury the previous week against LSU.

“Just going in there the first snap of the game, I’m like, ‘Wow, this is unbelievable. I can’t believe this is happening. I dreamed of this when I was a kid,’” Ta’amu said. “I knew I had to carry the team and I knew they needed a leader, so I stepped up. I’m glad I had the opportunity and took advantage of it.”

An offense that led the SEC in passing and ranked second in scoring didn’t miss a beat with Ta’amu, who completed nearly 67 percent of his passes for 1,682 yards with 11 touchdowns and four interceptions in just five starts. He saw his first significant action in the second half against LSU once Patterson took what ended up being his final snap at Ole Miss after tearing his PCL and led back-to-back possessions that ended in points, starting a string of seven straight scoring drives with Ta’amu as the starter.

A week later, Ta’amu led a last-minute, game-winning drive in his first road start at Kentucky. Three weeks after that, he threw for 247 yards and two scores to help the Rebels to an upset win at Mississippi State that capped a 3-2 end to the season. Ole Miss scored 35.8 points a game during that stretch, three more than its season average.

“I think when he did that, everybody was like, ‘OK,’” Luke said. “And then I think somewhere in the Texas A&M game, he got hit under the chin. Took a really big hit, came back and battled back. And then going on the road twice in the Southeastern Conference, a two-minute drive on the road to win a game. All of those things along with the type of young man he is, I think it just kind of culminated and the guys appreciated that.”

Ta’amu didn’t get much attention from FBS schools coming out of New Mexico Military Institute in 2016 despite accounting for more than 3,300 yards and 39 touchdowns as a sophomore. Ta’amu said it was because of his size — he was 175 pounds coming out of high school — while it’s his junior college coach’s opinion that a more unconventional delivery didn’t help.

Now 6-foot-2 and 212 pounds, Ta’amu has proven he’s got the physical skillset to produce in the SEC. It’s the seemingly unflappable composure that sold his teammates on their soft-spoken quarterback with a loud game.

“The way he carries himself makes that evident,” center Sean Rawlings said. “Seeing his first start against Arkansas, how confident and how composed he was, that reflected on the entire offense. You saw the entire offense start clicking and then as we progressed toward the end of the season, it was a progression every week. It’s obvious. It’s just that selfless confidence, quiet confidence and composure that allows the offense to be successful.”

Said defensive tackle Josiah Coatney, “We didn’t know exactly what he was going to do because some people crack under pressure, but he had kept cool, kept calm and had a lot of composure. When you see something like that, it’s definitely great.”

Ta’amu said his focus this offseason has continued to be increasing his vocal leadership, though he’s always going to be the type that pulls a teammate to the side to get his message across rather than make a scene in front of teammates. There are things Ta’amu said he can improve himself, namely accuracy and decision-making, but with arguably the SEC’s most talented receiving corps at his disposal, he figures to put up gobs of numbers.

Good or bad, everybody’s going to be looking at him — a role that perhaps only he saw coming as one of the SEC’s suddenly rising stars.

ATLANTA — The final step in Ole Miss’ appeal of the sanctions handed down in its NCAA infractions case is... read more