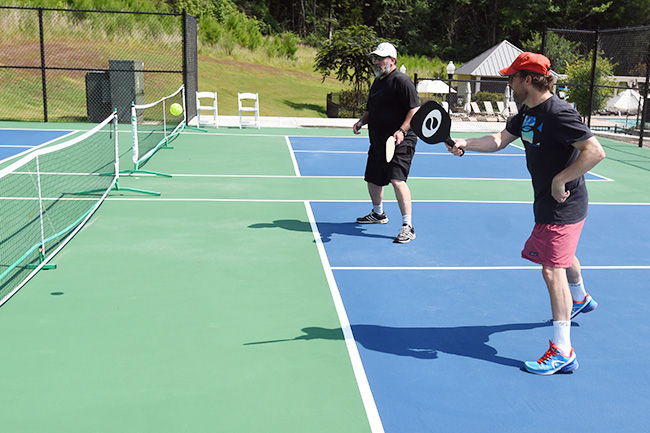 Once just a destination for tennis, Goose Creek has expanded its offerings.

The club, which was created by former Ole Miss men’s tennis coach Billy Chadwick and his brother Barney, has added pickleball courts to its complex. The courts were opened on July 4 with a grand opening ceremony taking place last week.

It was an idea that was formed in February, and four months later, the idea became a reality after construction began in May.

In fact, with all the amenities the club offers it was renamed last month. The facility is now kown as the Goose Creek Racquet and Health Club. There is a fitness center and full-sized pool on the property along with pickleball and tennis courts.

“In the summer I’m usually in Colorado and we play a lot of pickleball up there,” Louis Brandt, board chairman at Goose Creek, said. “We just recognized how popular it had become and thinking we needed another attraction (at Goose Creek). …I know also a lot of our tennis players here at the club play pickleball in the winter over at (Oxford Park Commission). Of course it’s indoors but they also play with lines for basketball, badminton and everything else. So this is strictly lined out for pickleball.”

Pickleball is a sport that combines elements of badminton, tennis and table tennis. A paddle is used to hit a ball similar to a wiffle ball over a net much like in ping pong or tennis. It can be a two or four player sport. The dimensions of a pickleball court are similar to a layout of a badminton court with rules close to those of tennis.

With the addition of another court sport it also gives variety to Goose Creek’s members who want a break from the larger tennis courts.

“It’s easier on the body,” Morris Denton, a club member and board member of Goose Creek, said. “Since you don’t have to run as hard it’s not as hard on the body. Whereas, if it’s a hard surface on the tennis court you’re putting strain on your hips and knees on hard courts.”

The three courts, the minimum needed to host a tournament, are currently open to the public throughout the month of July and then beginning in August participants must be accompanied by a member in order to play. On July 26 the club will hold a free pickleball clinic form 9-10 a.m. and again at 5-6 p.m.

The club’s first pickleball tournament will be held on August 4-5 and is open to the public. Registration is $25 per player and the style of tournament will be determined by who signs up. In general, men’s and women’s doubles, along with mixed doubles, are played at Goose Creek’s courts. For more information you can go to www.goosecreekclub.com.