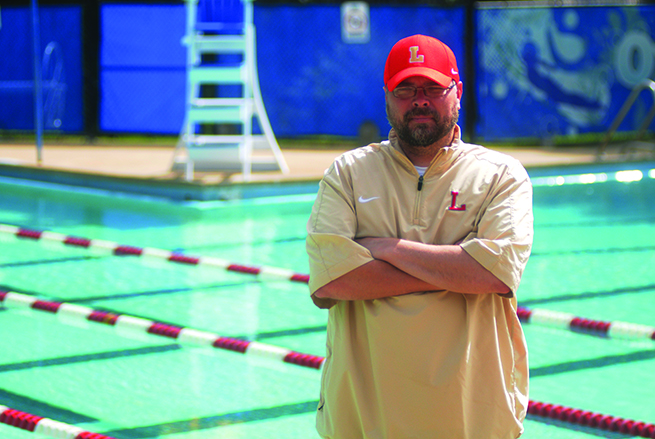 Since returning as a program in 2016, Lafayette’s swim team is trying to find it’s place among some of the state’s best. Josh Daniel took over as the Commodores’ swim coach after Nicole Robinson left for Cleveland Central in 2017.

Daniel has a background in swimming, albeit an unconventional one. His dad was a football coach for smaller Division I schools so Daniel was constantly changing schools. During his time attending high school in Missouri, he was an offensive and defensive lineman, but he was also a swimmer.

“I was a little bit of an anomaly,” Daniel said. “I was certainly a big swimmer. Swimming is kind of one of those things where if you’re athletic, and you’re not fat, you can be a decent sprinter.”

After graduating from Ole Miss and working in the banking profession for nearly a decade Daniel moved to Natchez and started teaching at Vidalia High School, in Vidalia, La. While there, he got into the coaching world, starting at the peewee football level. Daniel then became the middle school football coach and eventually the defensive line coach for the high school team as well as the Vidalia baseball coach.

Daniel then moved to Lafayette before the 2015-16 school year. Michael Fair had just been hired that spring and had his football staff filled out. Daniel was able to channel his swimming roots when then-assistant athletic director Greg Lewis approached him about replacing Robinson.

With last season being Lafayette’s second year back as a swimming program, the responsibility was put on Daniel’s shoulders to keep things afloat.

“I was excited. This was an opportunity to run my own program,” Daniel said. “Kind of do things the way that I thought they ought to be done. I’ve really enjoyed it.”

In its infancy, Lafayette has had modest success their first two seasons back in the pool. In Robinson’s lone season at the helm, the Commodores had six swimmers qualify for the North Half championships. Last season Daniel took seven swimmers to North Half.

“We’re a small team. We’re a young team,” Daniel said. “We’re just kind of getting things going. We’re thrown in there with the likes of Oxford and Tupelo, who are powerhouses.”

Participation is growing slowly but steadily, for Lafayette. Robinson had a roster of around eight swimmers in the Commodores’ first year back in the pool. This year, Daniel has 13 swimmers and has enough to field nearly half of the events offered at meets.

Lafayette has yet to send any swimmers to the state meet since restarting the program, though the Commodores nearly had a girl’s 200 meter freestyle relay team qualify last year but missed out by one position. Progress is being made but with a young program Daniel knows expectations must be tempered, yet gradually raised each new season.

The swim season began on Monday with teams beginning preseason practices. Lafayette’s first home meet will be on Sept. 11 when they take part in the Oxford Invitational at the Oxford City Pool.