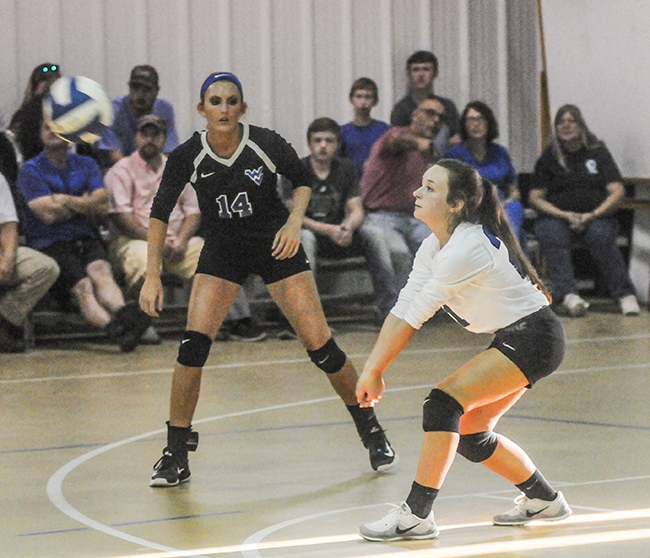 Water Valley's Laury Beth Hamilton attempts a volley during their match against Corinth at the Water Valley High School multipurpose building on Thursday. The Blue Devils dropped their season opener 3-1 (18-25, 25-17, 19-25, 18-25).

Water Valley did not intend to face Corinth in the first game of the season; it just worked out that way. The Blue Devils decided to embrace the challenge and in doing so competed with a perennial postseason team.

“I just kind of went with it,” Water Valley coach Allison McCain said. “I just said ‘play big or go home.’ …I think it’s positive. We’re not going to hang our heads on this. We know what we need to fix.”

In front of one their largest home crowds, Water Valley (0-1) struggled to in the opening set. Corinth (3-1) grabbed an early lead in the frame and held on for the quick 1-0 lead.

The Blue Devils responded with a second set performance that was closer to what McCain expected, and had seen from her team in last week’s classic games at Pontotoc. Communication and finding success off the first serve helped Water Valley even the match at 1-all.

“Knowing when to cover, knowing who to block,” McCain said when attributing success in the second set. “I think our blocking, our girls are coming out stronger and coming out and getting the hit.”

In the third and fourth sets Water Valley stayed close to the Warriors, but were unable grab a lead in either frame to keep the match alive to force a deciding fifth set.

“Everybody’s got high hopes (for the season),” McCain said. “Which I’m glad. That’s what I want.”

Water Valley gets a week off before their second match of the season. The Blue Devils travel to Carrolton to play J.Z. George next Thursday.