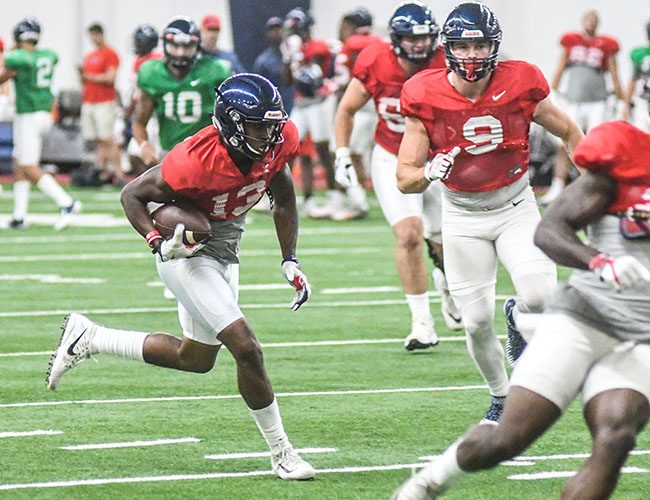 Ole Miss’ defense has been trying to catch up to the offense for the last couple of seasons.

That didn’t change much when the two went against each other in the Rebels’ first scrimmage of preseason camp Saturday. The scrimmage inside Vaught-Hemingway wasn’t open to fans or media, but coach Matt Luke and players offered some insight into how things went after the Rebels’ 11th practice Monday in preparation for the season opener against Texas Tech in Houston on Sept. 1 (11 a.m., ESPN).

The offense’s execution, particularly when it came to keeping drives alive, had the Rebels putting extra emphasis on situational defense during a two-out workout indoors Monday.

“I thought the offense for the first half of the scrimmage executed very, very well, and that was good to see,” Luke said. “I just thought defensively we had some opportunities to get off the field on third down, so that was a point of emphasis today. … If you have a chance to get off the field, let’s do it.”

Scottie Phillips, who began the fall as the No. 1 running back, ripped off an explosive run, Luke said — an indication Ole Miss still has work to do to improve a run defense that ranked 123rd nationally last season. Defensive tackle Austrian Robinson acknowledged that much, but with continuity hard to come by in the front seven during camp with the Rebels rotating heavily with positions on the two-deep still up for grabs, the group is far from panicking.

Defensive end Qaadir Sheppard repped with the first-team defense Monday after having a strong scrimmage. Sheppard, who was limited last season with a lower leg injury, showed a particularly quick burst into the backfield, Luke said.

“He did some really, really good things,” Luke said. “He was probably our best pass rusher in the scrimmage just as far as speed off the edge. Me looking at it as an old offensive line coach, he played with a different speed coming off the edge.”

The scrimmage lengthened Ole Miss’ list of injuries, though Luke said none of them are believed to be serious.

DaMarkus Lodge sprained his ankle and will likely be out a week, putting two receivers on the mend. A.J. Brown (hamstring) continues to be held out, but Luke said he and cornerback Javien Hamilton (hamstring) have started running and are expected to return by the end of the week.

Cornerback Ken Webster suffered a strained hamstring and will miss about a week, Luke said. Defensive tackle Sincere David will likely miss the next two weeks with a sprained MCL.

Vernon Dasher, who began the fall atop the depth chart at Star (hybrid linebacker/safety), was limited Monday after pulling a groin Sunday.