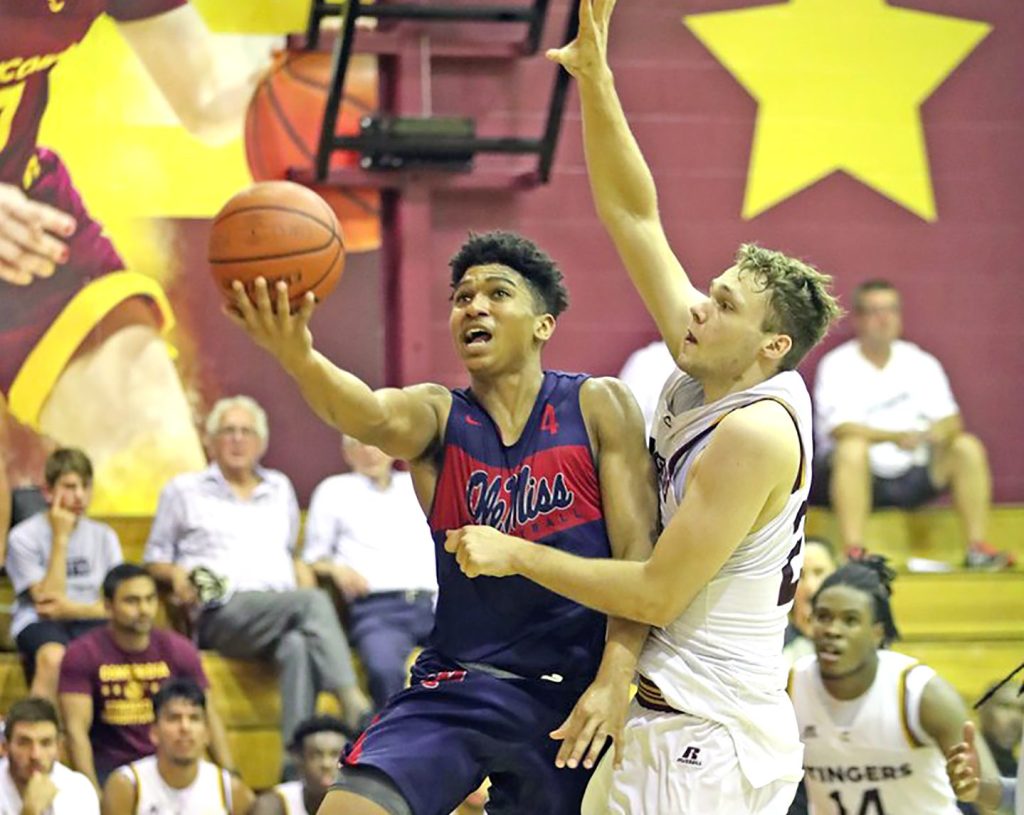 Ole Miss' Breein Tyree (4) goes up for a shot against Concordia in Montreal on Monday, Aug. 6, 2018. (Josh McCoy/Ole Miss Athletics)

There’s work to do for Ole Miss’ basketball team. The Rebels’ trip across the border gave first-year coach Kermit Davis a better idea of exactly how much.

Ole Miss posted a 3-1 record on its Canadian tour last week, though the Rebels had to work to get it. After a 41-point breather in its opener against McGill, Ole Miss fell behind by double digits in its final three games and rallied to win two of them, including overcoming a 27-point deficit in its finale against Ottawa.

There was also an 18-point loss to perennial power Carleton, which has won 13 of the last 16 Canadian national championships. The Rebels’ grit stuck with Davis, who enters his first season at the helm trying to move Ole Miss past its first losing season in 12 years, but the takeaways were mixed.

“We found some resiliency,” Davis said. “Another thing I found out is our lows are way too low. Our base has to come up.”

Davis has just five holdovers from last season’s roster that have played at the Division I level. He’s spent the last couple of months mixing seven newcomers in during summer workouts while trying to get everybody up to speed with installation on both ends of the floor, which Davis said has been minimal to this point.

Davis went with a different starting five for each game and substituted often to get looks at all of his options as players try to earn minutes and carve out roles for next season. The experience in the backcourt led the way with Terence Davis, Breein Tyree and Devontae Shuler getting the most minutes. Davis, who tested the NBA draft waters before returning for his senior season, led the Rebels in points (21) and rebounds (8.3) while Tyree was next at 14.3 points per game.

Dominik Olejniczak and Bruce Stevens are back in the frontcourt. Yet it was freshmen Blake Hinson and K.J. Buffen who got a majority of the minutes there, an indication of how much they’ll be relied on next season.

Davis even played the 6-foot-7 forwards together at times and said it’s something he’ll look at doing more, praising their length, toughness and physicality. Buffen was the Rebels’ second-leading rebounder at six per game while Hinson, who averaged nine points, also showed the ability to stretch defenses, shooting 60 percent (6 of 10) from 3-point range.

Olejniczak averaged just 12.8 minutes a game. He and Stevens, who averaged 7.5 points, “had their moments,” Davis said, but he’s looking for more from the Rebels’ most seasoned frontcourt players.

“On these trips, the coach finds out about their team, but the players really find out about themselves. How much work is ahead of them, their role on the team, and they’ve got to do some certain things to try to increase their role. All of those things are very good to find out in August.”

The primary emphasis when the Rebels officially begin practice in October will be defense after the Rebels allowed more than 77 points in their losses. Execution should improve on that end of the floor with more time on the floor, but it’s a work in progress.