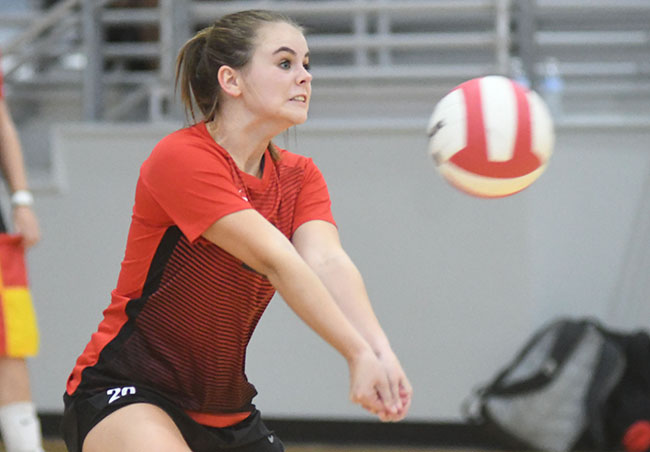 Clint Jordan scheduled Lewisburg early in the year for a specific reason. The Lafayette head coach wanted to see how his team stacked up against one of the favorites in Class II and he knew Lafayette would not see a better team than the Patriots on their schedule.

“Tonight they (were on a different level),” Jordan said. “The reason you schedule games like this is to see that. I felt like we didn’t play well, and when you don’t play well against a team that does play well, they hammer you. They took it to us tonight.”

Lewisburg took control from the opening serve and never let the Commodores gain any momentum. The closest the match got in the first two sets was a nine-point lead by Lewisburg.

The third set saw Lafayette be a little more competitive, staying within a couple points early. With Lewisburg leading 7-5, the Patriots closed on an 18-11 run to win the match.

The Commodores managed to put a handful of points together in a row at times, but it was not enough to slow down Lewisburg’s offensive attack.

“Lewisburg didn’t give us many opportunities to get a good swing,” Jordan said. “When they gave us an opportunity, we took them and we hit at a high rate. The problem is we didn’t get a lot of looks because of how they serve the ball and how they kept us off balance.”

Lafayette hits the road for a match at Corinth on Monday before returning home to host Pontotoc on Thursday to begin Region 4-Class II play.

Oxford match rescheduled
Lafayette’s season-opening match against Oxford that was postponed on Aug. 6 tentatively has a new date. Once all parties sign off, Lafayette will host the Chargers on Sept. 5. The original match was pushed back due to the Commodores’ new uniforms not arriving on time.

Newcomer Tariqious Tisdale will ‘definitely be a factor’ for…