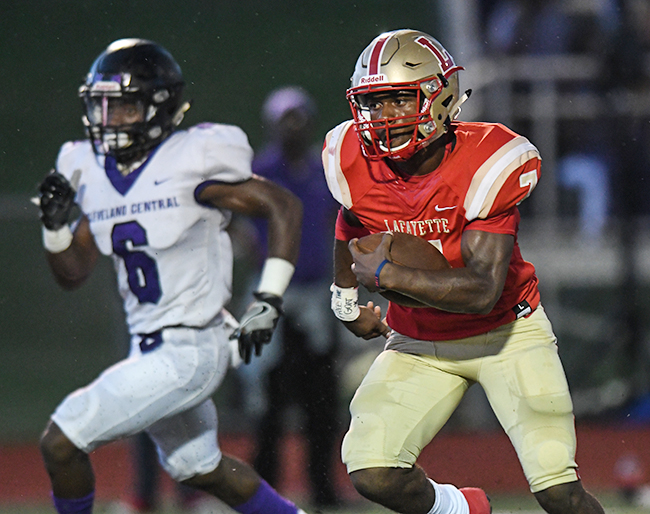 Lafayette High's Randy Anderson (7) runs for a touchdown against Cleveland Central in the 2nd quarter at William L. Buford Stadium in Oxford, Miss. on Friday, August 17, 2018.

If it had been played on the diamond, it would’ve been a run rule.

Lafayette turned a baseball score into a rout with a second-half onslaught, opening the season with a 48-6 pasting of Cleveland Central on Friday at William L. Buford Stadium. The Commodores rolled up 497 yards and scored four touchdowns in the final quarter and a half to easily exact revenge in a rematch of last year’s season opener that Central won 21-13.

Lafayette (1-0) eventually got going to do most of its damage in the run game, racking up 394 of those yards and all six touchdowns on the ground. Quarterback Randy Anderson was the catalyst with 135 yards and two touchdowns on 11 carries while going 10 of 13 for 103 yards through the air.

“He’s smooth making great decisions at quarterback,” Lafayette coach Michael Fair said of Anderson. “Didn’t turn the ball over. He’s electric when we call his number in the run game. He’s just going some good things for us even in the passing game.”

Jamie Shaw added 104 yards and a score. Lance Stewart had two touchdowns on just 12 carries while freshman Trikyus Woodall cleaned up at the end with 77 yards, including a 46-yard score on the game’s final play. 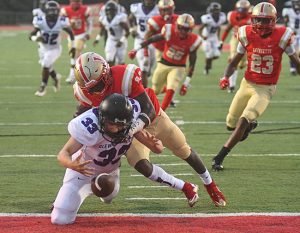 Lafayette High’s Quentin James (11) hits Cleveland Central punter Andres Becerril-Nieves (33), who fumbles the ball but falls on it in the end zone for a safety in the first quarter, at William L. Buford Stadium in Oxford, Miss. on Friday, August 17, 2018.

Lafayette (1-0) found Central’s end zone before locating its own, forcing safeties on the Wolves’ first two possessions for a 4-0 lead after a quarter. Central (0-1) got its lone score on Rodarrius Douglas’ 65-yard scamper 20 seconds into the second half to make it 18-6, but the Commodores forced another safety on Central’s next possession, igniting a 30-0 run the rest of the way.

“They can’t even find a button for it on (the stats program), much less three in one game,” Fair said of the safeties. “I think it says a lot about our defense and how they were running to the ball. We’ll take every point we can get.”

Big plays were rare for Central against a suffocating Lafayette defense that allowed just 29 yards in the first half, forced five punts, allowed two first downs and got a turnover on Woodall’s fourth-quarter interception. It all helped Lafayette overcome 11 penalties.

“We’ve got to clean up so much,” Fair said. “These guys were so amped up and ready to go that we had a hard time with our composure early. We made some mistakes that we usually don’t make, but I’m just chalking it up to how excited these guys are. Hopefully we’ll get a lot of that behind us.”

The Commodores will stay at home next Friday against Charleston.