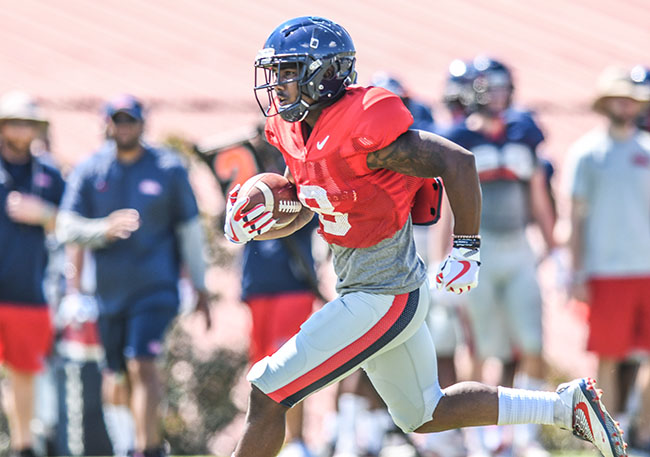 As Ole Miss coach Matt Luke decides exactly which true freshmen will contribute — and how much — this season, he’ll use the revamped redshirt rule to his advantage.

Players will be allowed to play up to four games at any point on the schedule without burning a year of eligibility, which means coaches can evaluate any freshmen on the fringe in a handful of games before deciding whether to start their eligibility clock. But Luke said most of the freshmen listed on two-deep heading into Saturday’s opener against Texas Tech won’t have to worry about keeping count.

“It won’t be a question of the four games or not,” Luke said. “Those guys are going to play.”

The freshman in line to make the biggest contribution this season is Kevontae’ Ruggs, whose speed, athleticism and toughness has vaulted him to the top of the depth chart at outside linebacker. Jacquez Jones opens the season as the backup at middle linebacker as the Rebels begin a youth movement at perhaps their most unproductive position in recent years.

There’s no plan to redshirt quarterback Matt Corral, who begins the season as Jordan Ta’amu’s backup after enrolling early to go through spring ball. The Rebels’ highest-rated signee figures to get reps in mop-up duty that will keep him engaged should anything happen to Ta’amu and could double as valuable experience in his bid to win the starting job next season.

Elijah Moore is running with the second team at slot receiver, though he and fellow freshman Tylan Knight are likely to make their biggest contributions in the return game. Moore will start the season as the primary punt returner while Knight will mix in there and at kick returner.

Luke talked highly in the preseason about the abilities of cornerbacks Keidron Smith and JaKorey Hawkins, though Smith is the only starting the season on the two-deep. With the Rebels’ depth at the position — Jaylon Jones, Myles Hartsfield, Ken Webster and Javien Hamilton are all back from last season — Hawkins could be a prime four-game candidate.

Other freshmen who could get a look in a handful of games before a decision is made or be contributors on special teams include receiver Miles Battle, linebackers Jonathan Hess and Luke Knox and defensive linemen Quentin Bivens, KD Hill and Jalen Cunningham.

“The guys that we feel like are ready, we’re going to put them in there and use the first four games,” Luke said. “And if there are some guys we are developing, we can use the last four.”

The likeliest redshirt candidates among the group are offensive lineman Hamilton Hall and receiver Demarcus Gregory for different reasons. Hall, a guard, is buried on the depth chart at one of the deepest and most experienced positions on the roster and would only be needed in an emergency situation. Gregory missed most of camp and hasn’t played since his junior year of high school after tearing his ACL.